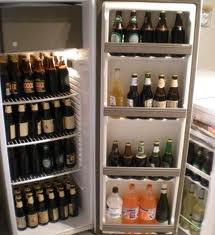 Imagine you’re at an informal social gathering, and you wander into the kitchen in search of a cold Coke. You open the refrigerator, but there are no soft drinks to be found. Instead, you face a fridge packed with cases of beer and icy quarts of vodka.

How do you react? Well, if you’re like most people, you think, “Damn. No Coke,” and look elsewhere or forget it. But if you’re an alcoholic, your reaction—your rapid, visceral reaction—would likely be quite different. You’d be drawn in. Your memory would instantly call up past associations with liquor, and you might even feel a craving—even if you haven’t had a drink in a long time. Then, you would either contemplate reaching for a bottle, or you would push yourself away from this cache of booze—pronto.

Alcoholics have an abnormal, automatic attraction to temptation, and most relapses result from poor impulse control. Yet most clinical treatments for problem drinking focus on reflection—the higher order reasons for maintaining sobriety—health, family life. Might it be possible to counter this unconscious bias for booze on a more basic level, defusing the powerful cognitive bias that magnetically draws alcoholics to a drink?

That’s the theory that a team of European psychological scientists have been exploring. The University of Amsterdam’s Reinout Wiers and his colleagues wondered if it might be possible to use physical and mental training to manipulate alcoholics’ “approach bias” for booze. They developed a therapeutic technique called “cognitive bias modification,” or CBM, which uses a joystick to change alcoholics’ approach bias to an avoidance bias for temptation.

They tested the theory and technique in an actual rehab facility, the Salus Clinic in Germany. They recruited more than 200 alcoholic patients who were at least three weeks out of detox, and assessed their craving level and their unconscious attraction to alcohol. Then half the patients participated in four 15-minute CBM sessions on four consecutive days. This consisted of deliberately pushing the joystick in reaction to pictures of beer, whiskey and so forth (literally and figuratively pushing the temptation away), and pulling the joystick in response to pictures of soft drinks. The control subjects had no training or sham training sessions.

When the scientists retested and compared the patients, the findings were hopeful. As reported in a forthcoming issue of the journal Psychological Science, the patients trained on the joystick—and only those patients—reversed their cognitive bias; that is, their alcoholic approach tendency became a strong alcoholic avoidance tendency. Craving for alcohol also decreased in these patients, while craving for soft drinks increased.

That’s all good, but what about the only result that really matters to the alcoholics: Did they stay sober? Following this brief training, all the patients went through the usual alcoholic treatment program, averaging about three months; then they went home. The scientists followed up a year later, and the results were mixed. Specifically, 46 percent of those with CBM training had relapsed a year later, compared to 59 percent of the controls.

The majority of alcoholics fail when they try to quit. So these results, while inconclusive, are not discouraging. At the least, they may point to one more tool for the recovering alcoholic to wield in the ongoing struggle to slam the door on temptation.

Wray Herbert’s book, On Second Thought: Outsmarting Your Mind’s Hard-Wired Habits, is published by Crown. Excerpts from his two blogs—“Full Frontal Psychology” and “We’re Only Human”—appear regularly in The Huffington Post and in Scientific American Mind.

In the summer of 2016, seven undergraduate students from across the United States participated in the University of Missouri’s first Alcohol Research Training Summer School (MU-ARTSS), an internship geared toward training students from diverse backgrounds