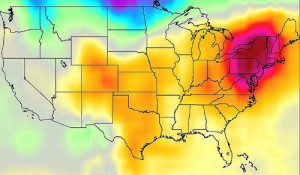 I live in Maryland, where we have been suffering through an unrelenting heat wave all summer, and I confess I have cranked up the AC on the worst days. But I always feel guilty about it when I do, and I turn it off whenever the air dips back into the tolerable range. So I’m no saint, but I am mindful. I am motivated by thoughts of the future generations, my kids and their kids and all of the people who will have to inhabit this overheating planet.

We all make more or less responsible choices like this every day. We drive hybrids or guzzlers, recycle or don’t, protest or endorse the Keystone XL pipeline. Every one of these choices involves a tradeoff, a sacrifice now for uncertain benefits in a distant future. But how do we manage to take the long view?

This is obviously complex, but one fact is indisputable. Countries vary dramatically in their records of environmental responsibility. Scandinavian nations are well known for their willingness to sacrifice for the future good, while countries like India and Iraq lag far behind. Clearly there are economic and political reasons for these stark differences, but is it also possible that human psychology plays a role in creating collective pro-environmental mindsets—or the opposite?

Psychological scientist Hal Hershfield of New York University believes so. Working with colleagues Hye Min Bang and Elke Weber of Columbia University, Hershfield has been exploring a fresh explanation for these national differences. He wondered if people might be motivated—or not—by their perceptions of their own country’s history—and future. That is, does living in a nation with deep historical roots allow for a longer view of the future, which in turn promotes self-sacrifice for the sake of the environment?

The scientists derived this intriguing idea from what’s called Gott’s Principle, named after the astrophysicist J. Richard Gott. Gott has argued that our current point in time is, on average, the midpoint between the beginning and the end, so that the best guess about the time remaining is the time already past. For example, if the USA is 237 years old today, the best guess is that the country will last until 2250, plus or minus. So citizens who perceive their nation as having been around a long time—these citizens will be confident in their nation’s future endurance. Hershfield and colleagues added the environmental argument—that this sense of a robust future will promote environmental responsibility—which he tested in the lab in two experiments.

The first study was fairly straightforward. They collected data on the environmental records of 131 countries, using the Environmental Performance Index. The EPI combines scores on ten categories of environmental performance, from air pollution to clean water to biodiversity and habitat protection. Then they correlated these scores with each country’s age—its years as an independent nation. They also controlled for GDP and measures of political stability.

The results were unambiguous. There was a strong link between a country’s age and its overall environmental performance. This remained true even after controlling for economic success and political stability. What’s more, the scientists bolstered these findings with data from a recent Gallup poll of citizens themselves, which asked: How much do you know about global warming and climate change, and how serious a problem do you think it is? Statistical analysis showed that these national tallies of individual concerns accounted for the connection between national age and environmental performance. So it appears that citizens’ sense of enduring national history increases their confidence in the future—and their concern—and that this collective mindset leads to better environmental policies.

Hershfield and colleagues wanted to examine this link in a different way, so in a second study they actually fiddled with Americans’ sense of the past. The US is a pretty young country compared to places like England and Japan, but it’s possible to manipulate citizens’ perceptions of national age. Here the scientists used historical timelines: Some volunteers saw a timeline running from Columbus to present day, so the nation’s 237 years dominates the timeline. Others viewed a timeline beginning with the Roman Empire, in which these 237 years occupy a very small part of history. The idea was that those who were primed to think of the US as mature and enduring—these citizens would treat the environmental more responsibly.

And that’s what they found, and describe in a forthcoming issue of the journal Psychological Science. They gave all the citizen-volunteers the opportunity to make a donation to a non-profit environmental advocacy group, from nothing to $50. When they crunched the data, those with an elongated sense of American history were willing to part with much more of their earnings for the sake of the environment. Keep in mind, this was not just a measure of attitude or policy proclamations—this was real out-of-pocket dollars.

These findings may have some practical implications. Government regulators have in recent years—and especially in the Obama administration—embraced the notion of “nudging” citizens to change their behavior in ways that increase the public welfare. This approach—known as “soft paternalism”—aims to make broad and subtle changes in the way that citizens think about their choices, so that they are more likely to chose one way over another. Hershfield’s work suggests that it may be more effective to carefully segment and target groups of citizens. Messages that play up the country’s long past, for example, might be aimed at citizens who already have reason to care about future generations—grandparents, for example, who have the choice to switch off the AC.