News > Full Frontal Psychology > “After you, please”: The ancient roots of etiquette 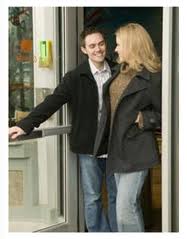 I was drilled in good manners growing up. I wouldn’t dare sit down at the table until guests had been seated. I always walked curbside, especially when walking with a woman. And I still to this day hold every door for whoever is following me, including complete strangers. These rules of etiquette are second nature to me, inscribed in my neurons.

My parents never told me why we do these things. They are simply things one does, out of politeness and respect for others. But now I read that my motives may not be entirely noble. According to new research from Penn State scientists, etiquette may be an evolved form of cooperation. In particular, holding the door for another may be part of a silent pact between holder and follower—a sophisticated but unconscious calculation to minimize collective effort.

In order to demonstrate this, psychological scientists David Rosenbaum and Joseph Santamaria videotaped almost 150 people as they exited the student union building on Penn State’s campus. They later had independent raters analyze the film, noting: whether or not each person held the door, and for how many followers; the distance between the holder and the follower(s); how long the door was held open, and whether the follower(s) picked up their pace or not. They wanted to see if total effort spent was more or less than it would have been if each person handled the door on his own.

It was less, clearly. As reported in a forthcoming issue of the journal Psychological Science, those who arrived at the door first were more likely to hold the door if the follower was closer, and they were willing to hold it longer when two people followed. What’s more, followers were more likely to speed up when someone was holding the door for them, implicitly signaling that they understand and agree to the pact. These calculated behaviors may or may not benefit any individual on a given encounter, but they do reduce overall expenditure of effort by the group.

These results do not rule out respect and politeness and gentility and kindness. They just mean that these altruistic sentiments were layered on later, long after the cooperative group behavior was deeply engrained.

Wray Herbert’s book, On Second Thought: Outsmarting Your Mind’s Hard-Wired Habits, explores the evolutionary roots of thinking and judgment. Excerpts from his two blogs—“Full Frontal Psychology” and “We’re Only Human”—appear regularly in The Huffington Post and in Scientific American Mind.

News > Full Frontal Psychology > “After you, please”: The ancient roots of etiquette