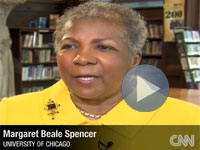 Psychological scientist Margaret Beale Spencer says that children can teach us a lot about the society in which they’re raised. “Our children are always near us because we are a society, and what we put out there, kids report back. You ask the question, they’ll give you the answer.”

In 2010, CNN commissioned Spence to lead a pilot study examining children’s attitudes toward race. The test she designed involved 133 black and white children from different economic and regional backgrounds in the United States.

The young students in Spencer’s study saw drawings of five children whose skin color ranged from dark to light. Then, the participants were given instructions such as, “Show me the dumb child,” “Show me the mean child,” and “Show me the smart child.”

Overall, white children tended to associate light skin with positive characteristics and dark skin with negative characteristics. Black children also showed a bias favoring whiteness, though it was not as strong as the white children’s bias. Surprisingly, there was little difference in the levels of racial bias shown by children who were four to five years old and children who were nine to ten years old — so the children’s ideas about race didn’t seem to change as they got older.

What’s the key to reducing this bias? According to Spencer, actions speak louder than words. “The most significant lessons take place from observed behavior,” she says. “So before moving to teaching our children concrete ideas, the children have to see us living those beliefs, those ideas, those values in real time.”

Video > Around the Web > Kids Show How Society Thinks

A sample of research exploring memory for repeated images, stability and change in implicit bias, and mixed emotions toward racial out-groups. More

Writing a New Story: How Narratives Can Improve Intergroup Attitudes

The real power to change people’s hearts and minds may lie in the television programs, books, and other media we consume on a daily basis. More