Uncategorized > The Perks of Being Detail Oriented 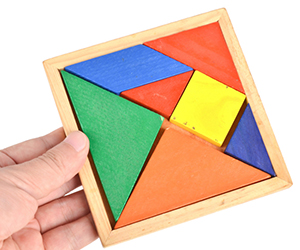 In a busy, cluttered world, it can often be difficult to find things. Luckily for us, the location of objects is often related to the context in which they are found, which means that we can learn from our exposure to repeated contexts to help us more quickly find what we’re looking for.

Researchers who study this type of learning — called contextual learning — have suggested it is influenced by the way we look at and process scenes. When people view a scene, they are either biased to process it globally — focusing on the overall structure of the scene rather than the small details — or to process it locally — focusing on the smaller details rather than the bigger picture.

One theory of context learning, the contextual learning account, suggests that people use global information to determine the likely locations of objects, while a competing theory, the subset account, suggests that local information is used. In a recent article in The Quarterly Journal of Experimental Psychology, researchers Lauren Bellaera, Adrian von Mühlenen, and Derrick Watson (University of Warwick) tested these two competing theories.

Forty participants completed a shape-determination task. The participants viewed larger shapes such as squares, diamonds, triangles, or circles that were composed of smaller shapes (for example, a collection of small triangles that formed the shape of a square). In each trial, participants had to determine whether a specific shape was present in the display. The shape was equally likely to be present in the larger overall (i.e., global) figure or in the smaller (i.e., local) shapes that made up the larger figure. The researchers used participants’ responses to determine whether they were biased to view a scene globally or locally.

Participants then completed a visual search task where they had to find a target letter (T) located among distractor letters (L). Some configurations of target and distractor letters were repeated during the task, and the researchers analyzed participants’ responses to new versus repeated displays to see if contextual learning had occurred. The researchers found that contextual learning had occurred, and that this effect was greater for participants who were biased to process scenes locally than for participants who were biased to process scenes globally.

These findings are consistent with the subset account of contextual learning, and suggest that the ability to use previous contexts to facilitate searches is related to the extent to which people exhibit global or local processing biases. Those who are biased to process scenes locally seem to have an advantage when it comes to learning from, and searching within, repeated scenes.

Uncategorized > The Perks of Being Detail Oriented