The message may seem ridiculously obvious: “If she doesn’t consent, or can’t consent, it’s rape.” So why does the White House need to enlist Benicio Del Toro, Daniel Craig, and other famous actors to deliver this explanation in public service announcements? Why did the California legislature feel compelled to pass More

Elizabeth A. Yeater and Geoffrey F. Miller’s May/June 2014 Observer article on sensitive-topics research describes their Sisyphean attempts to convince their institutional review board (IRB) that questionnaire research on topics such as trauma and sex does not pose more than minimal risk. They dutifully listed the IRB’s objections, which persisted More 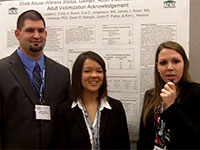 Leroy Hendricks had a long history of sexually molesting children, including his own stepdaughter and stepson. When he was 21, he was convicted of exposing himself to two girls, and he continued to prey on kids until he was sent to prison at age 50 for molesting two 13-year-old boys. More

Research on sex and trauma faces an ethical dilemma: how can we find out more about the effects of such psychologically sensitive topics without hurting the people who participate in the study? Institutional review boards that approve research on human subjects believe that asking people about sex and trauma is More