The National Multicultural Conference and Summit 2013 will be held January 17-18, 2013 in Houston, Texas. The theme of the conference is “Transforming Multicultural Psychology: Engagement, Renewal, and Action Across Generations.” For more information visit: www.multiculturalsummit.org More

The Unexpected Impact of Coded Appeals

The New York Times: After signing into law the landmark Civil Rights Act of 1964, President Lyndon B. Johnson famously told an aide, “we just delivered the South to the Republican Party for a long time to come.” Indeed, the Johnson-Goldwater contest was notable in two important respects related to More

APS Fellow Michele J. Gelfand, who studies conflict and conducts comparative cultural research, accepted the Anneliese Maier Research Award at a September 13, 2012 ceremony at Heidelberg University in Germany. The award is granted by the Alexander von Humboldt Foundation and includes a €250,000 prize, which will fund Gelfand’s collaboration More 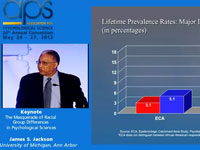 There are considerable health disparities in American society that seem to be tied to race. White people, for instance, live many years longer on average than African Americans. In his keynote address at the 24th APS Annual Convention, James S. Jackson of the University of Michigan, who is African American More 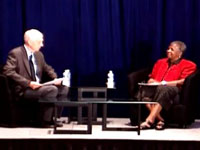