APS Fellow Eric Eich, who began serving as Editor in Chief of Psychological Science in 2013, has passed the reins to Interim Editor D. Stephen Lindsay, who began his term on July 1. Eich, a professor of psychology at the University of British Columbia in Vancouver, Canada, is exiting his More

Microlending Success Starts with a Smile

The economist Muhammad Yunus was awarded a Nobel Peace Prize in 2006 in recognition for his pioneering work in microlending – making small loans available to people living in poverty. Yunus believed that entrepreneurs in rural, impoverished areas needed the same things as any other business—capital to get their small More 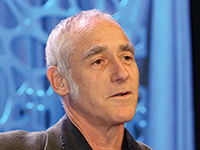 The effect of parental supportive emotion socialization on internalizing symptoms (IS) in early childhood is moderated by child executive function (EF). For children with low EF, there is a negative relation between supportive behaviors and IS, but there is no relation for children with high EF. More

People Who Need People Have the Longest Lives

The Wall Street Journal: Personal independence is such an iconic American value today that few of us question it. In previous generations, retirees lived with family, but now that a large swath of older people can afford to live on their own, that’s what they choose. The convenience of digital More