One of the most difficult and paradoxical symptoms of depression is obsessive thinking about the disease itself. Many people suffering from depression describe not only an inability to banish sad memories, but also a preoccupation with the origins and nature of disabling melancholy. Psychologists call this rumination. People with such More 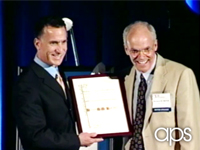 The Quest for a Science of Clinical Psychology: A Progress Report

As a pioneer in the scientific study of clinical science, Richard McFall is in a unique position to speak on the state of science in clinical psychology. That state, he said, has seen brighter times. McFall, the recipient of this year’s Distinguished Scientist Award from the Society for the Science More

In last month’s column, I wrote about the National Institute of Mental Health’s, or NIMH’s, recent proposal to redirect a portion of its extramural research investment away from basic behavioral and social science research into research that more directly addresses issues of mental health and illness. This development reflects increasing More

Overreaching? The real question: Why are some kids more affected by media violence than others? IT WOULD HAVE BEEN helpful if the writer had provided some statistics for the conclusions presented in the Influence of Media Violence on Youth section of the story “In the Public Interest” [Observer, August 2004]. More

Clinical Science Training at a Crossroads

More than a decade ago, Richard McFall challenged clinical psychology to become more connected to science, specifically to use methods supported by scientific evidence. Among other things, his challenge inspired a movement within psychology to develop clinical training programs that are grounded in research. In a direct outgrowth of that More

As an undergraduate at Brown University, Aaron “Tim” Beck took his first – and last – class in psychology. “It all had to do with brain anatomy and physiology and so on,” he said. “I was disappointed.” More than 50 years later, APS Fellow Beck’s influence on psychology has made More