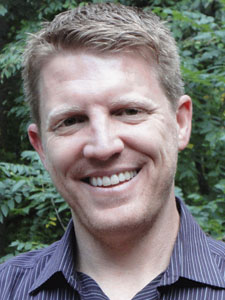 1) How negatively stereotyped targets’ (e.g., women in math or ethnic minorities in academics) motivation, attention, and memory are affected by situations that prime negative group relevant stereotypes both in the moment and over time.

2) How factors such as contextual primes or genetic predispositions undermine a person’s ability to perceive novel, negatively stereotyped outgroup members in a non-biased manner. My approach to these topics applies an overarching theme that examines how these processes are influenced by interactions between implicit (i.e., fast) and explicit (i.e., slow) cognitive processes and the neurophysiological interactions between subcortical and prefrontal cortical networks that are integral to implicit and explicit processing in general.

I grew up in a very diverse neighborhood, with friends from all walks of life, and am a first-generation college student who has a track record of performing poorly on standardized tests. So entering college, I had a lot of data points suggesting that people were people, and things other than natural intelligence may affect performance in classroom settings; but also a lot of cultural evidence suggesting otherwise. At the same time, I’ve always had an inherent interest in biology and neuroscience (it was one of the only things that would keep me awake in high school). Some of my fondest college memories are of times spent studying for my molecular biology and mammalian physiology courses and volunteering in a genetics laboratory (and yes, I know how sad that may sound to some). But once I took my first courses in social psychology, cognitive psychology, and biopsychology, I knew things would never be the same. My whole worldview made sense and was imbued with meaning. The field of social neuroscience is so exciting to me because it provides a framework for the union of my two passions and a means to tackle critical social questions with the interdisciplinary approach they require. We are identifying the basic biological components that influence and inform the most complex of social processes. How can you not get excited about that?

I have been extremely fortunate to have some wonderful academic mentors and influences in my life. My graduate adviser, Toni Schmader, spent so much time helping me hone my research acumen, writing and presentation skills, etc., that it’s surprising she can still stand the sight of me or sound of my voice. As I get my lab up and running and deal with my own graduate students, I find myself uttering the phrase WWTD (What Would Toni Do) on pretty much a daily basis. My postdoctoral adviser, Jordan Grafman, had a major influence on how I think about principles of cognitive neuroscience, neural function, and hierarchical neural processing. I have John J.B. Allen to thank for teaching me everything I know about basic EEG methodologies, and Michael X. Cohen to thank for pushing that understanding to the next level. And I wouldn’t have become interested in the theory of stereotype threat in the first place if it wasn’t for my terminal master’s adviser, Avi Ben-Zeev. Once again I find myself in an extremely fortunate situation working as an assistant professor at the University of Delaware. At UD I receive guidance and inspiration from the likes of Sam Gaertner, Mike Kuhlman, Bob Simons, and Greg Miller on a daily basis. Finally, I carry around György Buzsáki’s book Rhythms of the Brain like it was my lone, yet all-satisfying, source of spiritual guidance.

My future research agenda will tackle the utterly vexing question of why minorities in academics, or women in STEM fields, who are initially the most identified with their respective domains, are often the most likely to leave that domain. Specific to perceivers, we’re examining ways to track, and ultimately increase, the evolution of trust between two ethnic outgroup members. We’re also identifying ways to promote encoding of different types of information associated with outgroups in hopes of both decreasing bias and facilitating more accurate predictions of how outgroup members might behave. An overarching question embedded within all these future research questions is how genes (specifically SNPs that influence neural plasticity) and context alter the dynamic, neurophysiological interactions between neural regions (e.g., coherence and phase locking within different frequency bands between different regions) deemed integral for person perception, emotion, and executive function. The big prize of course is to identify which of these neural patterns in turn predict individuals’ behavior in the aforementioned processes.

My colleagues and I were interested in understanding the role of different prefrontal cortical (PFC) brain regions in the regulation and expression of implicit and explicit social bias. We were also interested in how different genetic single nucleotide polymorphisms (SNPs) involved in the modulation of neuroplasticity between and within neural regions may alter this relationship. We examined these questions in an extremely rare sample of patients with varied PFC lesion sizes and SNPs in the brain-derived neurotrophic factor (BDNF) gene, which promotes (methionine–valine [Met/Val] SNP) or stifles (valine–valine [Val/Val] SNP) plasticity in damaged PFC regions (i.e., they either had more or less of different PFC regions intact and a SNP that either promoted neural plasticity within these regions or suppressed it).