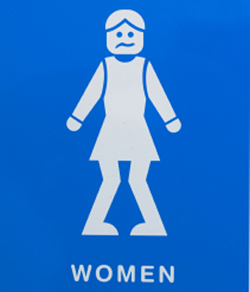 Watching Nobel laureates dancing the sirtaki and witnessing a flight of 1,200 paper airplanes were two of the unconventional events used to honor the winners of the 2011 Ig Nobel Prizes.

Among the winners were Mirjam Tuk, Debra Trampe, and Luk Warlop, who received this year’s Ig Nobel Prize in Medicine for research demonstrating that people with full bladders make less impulsive choices. Their work was published earlier this year in Psychological Science.

At first, Tuk wasn’t sure what to make of the prize. “I was curious to what extent this reward only highlights hilarious research [as opposed to] serious research, which mine was in the end. After getting some more information, and seeing a number of scholars with great reputations among previous winners, I was pleased to receive it. I see it as a prize for creativity and originality.”

Tuk’s collaborator, Luk Warlop, believes that prizes like the Ig Nobel have an important influence on science. “Here in Belgium we find it hard to attract creative people to research careers,” he says. “This kind of award may help.”

Peter Snyder, from Lifespan Hospital in Rhode Island, shared the Ig Nobel Medicine Prize for separate work investigating the relationship between full bladders and decision making. Snyder agrees with his fellow winners that the Ig Nobel Prizes are good for science.

“The entire purpose of the awards is to spur public interest in science and to particularly show students and the next generation that science does not have to be a dry, dull, boring endeavor,” he says.  “You can laugh about your work while doing very credible science.”

For more information on how a full bladder can improve decision making, read additional coverage from and .