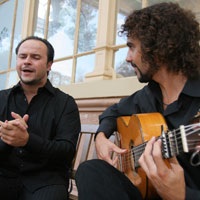 Armies train by marching in step. Religions around the world incorporate many forms of singing and chanting into their rituals. Citizens sing the National Anthem before sporting events. Why do we participate in these various synchronized activities? A new study in Psychological Science suggests that when people engage in synchronous activity together, they become more likely to cooperate with other group members. The results of the study, conducted by Stanford University psychologists Scott S. Wiltermuth and Chip Heath, showed that synchrony fosters cooperation. Even when all of the volunteers had financial incentives to cooperate, the volunteers from the synchronized groups tended to be more cooperative during the games (and ended up earning more money) than did volunteers from groups who had moved asynchronously. And even more interesting, in the last economics game, participants from the synchronized groups were more willing to contribute tokens to the public account, sacrificing their own money to help their group. In addition, volunteers from the synchronous groups reported greater feelings of being on the same team. Societies rely on cooperation among their members to thrive and be successful. These findings suggest that cultural practices involving synchrony (such as dancing, singing or marching) may enable groups to produce members who are cooperative and willing to make personal sacrifices, for the benefit of the group. The authors conclude that “synchrony rituals may have therefore endowed some cultural groups with an advantage in societal evolution, leading some groups to survive where others have failed.”

The method section of this study does not say how long the subjects walked. This makes it unreproducible.