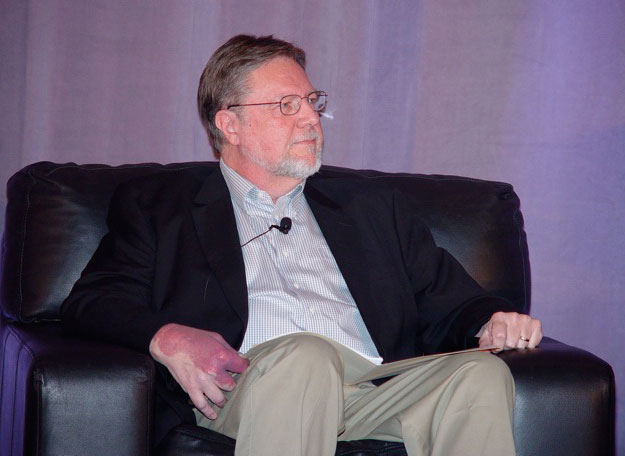 There’s the Joy of Cooking, the Joy of Sex, and now … the Joy of Theorizing. Daniel Wegner has created more than his share of influential theories in psychology, and in his William James Fellow Award Address at this year’s APS Convention, the Harvard psychological scientist reflected on what theories are and why he enjoys them so much.

A psychological theory can be defined, he said, as mechanism of mind that yields predictions of behavior under specified conditions. Putting it more colorfully, we should think of them as “automata”—theories take what people do and say and make them into little, realistic, but simple machines. Like Jacques de Vaucanson’s 1739 mechanical duck that could “eat” food pellets and excrete duck poop at the other end, a theory can be a simple cause-effect relationship—under some initial condition, X will happen. Those are what Wegner calls “single automaton theories.” But they can also be more complex—“dual automaton theories” such as the dual process models that have been so popular in psychology in recent decades. They can be even more complex contraptions that incorporate multiple automata acting in sequence or hierarchically.

As illustrations, Wegner briefly summarized the four theories—the four automata—that he is best known for.

Action Identification Theory is a theory of what people think they are doing before, during, and after they do it. Leading up to getting married, for example, partners think increasingly of their impending action as an expression of love, and they also think increasingly of the low-level details (setting a date, hiring a photographer, etc). These thoughts peak at the time of the wedding, and then decline afterward. On the other hand, worries about the downsides of marriage, possible problems, and losing one’s freedom decline in the lead-up to the wedding, but increase again afterward. Action Identification Theory charts the rise and fall of higher- and lower-level conceptions of an action, the automata whose interactions change the meanings of the things we do over time.

Wegner then described Ironic Process Theory, which describes why we sometimes do or say the things we most want not to do or say. You know where I’m going with this: Don’t think about a white polar bear. Oops, you just did, and you’re still doing it. Suppressed thoughts end up leaping to the minds of experimental subjects, and people they are told not to think about pop into their dreams uninvited. It appears there’s a part of the mind—a little automaton—whose function is to be on the lookout for things we don’t want to think about or do. It’s this automaton that causes mental failures—precisely through its ceaseless monitoring.

The most controversial theory Wegner has built so far is his theory of Apparent Mental Causation, which says that conscious will is an illusion that results from misapplying notions of causality (one thing causes a subsequent thing) to our own behavior. We seem to think an action and then it happens, the same way a billiard ball will hit another billiard ball and cause it to move. But Wegner and his colleagues have shown that under certain circumstances, subjects can develop a sense of their own authorship even over others’ actions if they are induced to think of the action just before the other person makes it. In other words, there is in our heads “an automaton that causes feelings of conscious will.”

Lastly Wegner described his theory of Transactive Memory. We think of memory as something in our heads, facts linked to each other through associations. But really, memory is all over the place. He has found, for example, that computer terms pop to participants’ minds readily after they are asked a series of tough questions. It’s what he calls the “Google effect”: “When we can’t think of a fact, we think of a source”—we ask ourselves where to find information we need but don’t have stored in our heads. We know it’s out there—in our file drawers, in our computers, on the Internet, and just generally in other people’s heads. Transactive memory, then, is “an automaton that remembers who knows what.”

A psychological theorist is like Santa Claus Wegner said. We may not be sitting up at the North Pole, but we build these toys, making people out of parts. Instead of thinking of theories as complicated and intimidating, think of them as “lovable robots.” They are mechanical people made out of parts “that should be simple and predictable, even stupid.”

Wow. Whoever wrote this really had their act together. You don’t always come across scientific reporting that is this clear and concise–nice work!

Vaucanson´s mechanical duck provides an example, as much a piece for entertainment as a physiological model; but as this theory of eating behavior left out the brain it is ignored by neuroscientists. Their theory postulates instead that eating behavior is controlled by hunger and satiety centers in the brain, which act together to keep body weight constant.

However, Vaucanson´s theory is more likely the correct theory; there can hardly be a satiety center in the brain because in just a few decades, more than half of all men will be obese (www.noo.org.uk/NOO_about_obesity/trends).

While both these theories are enjoyable, neither one has managed to solve the more difficult problem, control of body weight and hence, they are both at least partially unrealistic.

Combining enjoyable theory and reality is a difficult task, elegantly managed by Daniel Wegner in his many theories.