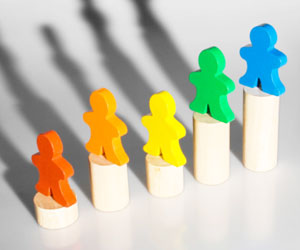 Just like adults, children from across different cultures show implicit intergroup biases, according to a new study published in Psychological Science. The research suggests that children may show these biases as a result of their early experiences with status hierarchies.

Psychological scientist Yarrow Dunham of Princeton University and colleagues conducted several experiments in which White-American children, ages 3 to 14, and adults were asked to look at a series of racially ambiguous faces and guess their race (e.g. Asian, White, or Black). The faces were presented as happy or angry, and the researchers hypothesized that the emotional expressions would sway the participants’ guesses towards one race or another, depending on their own race.

The results revealed an in-group bias: Overall, participants were 1.32 times more likely to characterize angry faces as Black in comparison to happy faces. And they showed a similar in-group bias when categorizing ambiguous Asian faces.

This result did not differ across the different age groups — even 3- and 4-year-old children were more likely to characterize angry faces as Black or Asian (as opposed to White). These findings suggest that this implicit in-group bias remains stable with age.

But the in-group bias wasn’t limited to White Americans. Taiwanese participants were more likely to categorize angry faces as White, compared to happy faces. This result suggests that this in-group bias is stable across cultures.

Given these findings, one important question remained to be answered: Are these ratings due to some innate in-group favoritism, or could it be that the White-American and Taiwanese participants were showing favoritism simply because their own groups were high-status groups in their respective cultures?

The researchers conducted the same experiment with Black-American participants, an historically disadvantaged group.

And this is where the findings diverged: Black-Americans characterized the angry faces as Black and White equally — they did not show in-group favoritism.

These findings suggest that, even at 4 years old, the Black-American participants have learned and internalized the prevailing status hierarchy in America rather than simply favoring their own group over others.

The researchers conclude that these implicit intergroup attitudes are enculturated early and automatically, at the same time that children are forming representations of social groups and are able to explicitly categorize people according to race.