Envisioning a bright future should pave the way for success, right? Maybe not. Research suggests that thinking about an idealized future may actually be linked with economic downturn, not upswing.

“[F]antasizing about having attained a desired future may lead people to mentally enjoy the idealized future in the here and now,” explain researchers A. Timur Sevincer of the University of Hamburg and colleagues. As a result, “it prevents them from preparing for possible obstacles and from mobilizing the effort needed to make the events come true.” 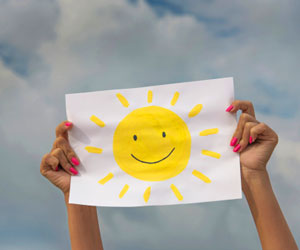 Previous research suggests people who think about or imagine a rosy future are actually less likely to put forth effort to achieve such a future and enjoy relatively less success, in domains as diverse as professional accomplishment, personal relationships, and health. And the link seems to hold across different ages and different cultures.

Sevincer and colleagues wondered whether the link between positive thinking and low achievement on the individual level may scale all the way up to a societal level given that people drive economic growth. Specifically, they hypothesized that “a cultural climate of positive thinking about the future would predict low economic achievement at the level of the society.”

In their first study, the researchers conducted a content analysis of news stories about the 2007-2009 economic crisis from the Economy section of USA Today, the daily newspaper with the highest circulation in the United States.

They found that positive thinking about the future (as reflected by a positive, future-oriented focus in a news story) was a significant predictor of a drop in the Dow Jones Industrial Average in the week and the month after the article was published. Notably, the association only worked in one direction — the results showed that drops in the Dow did not predict subsequent positive thinking.

Focusing on an idealized booming economy, the researchers say, may lead people to ignore potential obstacles, dial back on the effort that contributes to economic growth, and seek out risky ventures they might not otherwise have undertaken. Ultimately, these behaviors could contribute to worse economic performance.

Sevincer and colleagues acknowledge that the correlational relationships evidenced in their studies do not warrant causal conclusions and that future work is needed to investigate whether these findings extend to other types of documents, other countries, and other historical eras.

You can read more about the research in an article from the New York Times, “Rose-Colored Words, but Gray Outcomes.”