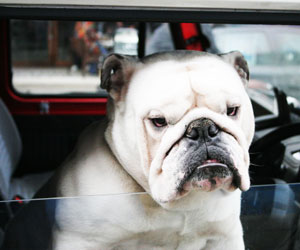 It’s that time of year again – the time to gather with family and friends, to celebrate the passing of another year…to spend hours in a car dealing with pent-up roadway aggression?

According to the U.S. Department of Transportation, long-distance trips increase by 54% in the 6-day period surrounding Thanksgiving and by 23% in the weeks around Christmas and New Year’s. Most of those trips take place in personal automobiles.

Being stuck in traffic on a regular day is frustrating enough, but racing to be home for the holidays could make driving at this time of year a particularly fraught endeavor.

In a new article in Current Directions in Psychological Science, researcher Christine Wickens of the Centre for Addiction and Mental Health in Toronto and colleagues at York University investigate the factors that contribute to aggressive driving, and the measures we can take to alleviate it.

So, for example, research suggests that drivers who are young, who are high in “Type A” characteristics of competitiveness and achievement motivation, and who feel overwhelmed by incoming sensory information are more likely to be aggressive drivers.

At the same time, situation-related factors, such as cluttered urban roadways and offensive driving by others, contribute to driver stress and, ultimately, driver aggression.

While the majority of Americans seems to recognize the danger of aggressive driving, a significant proportion admits to bad driving practices, including tailgating and speeding to beat a yellow light.

So what can we do about it?

Other programs take a more incentives-based approach. Some insurance companies, for example, are now allowing drivers to place a tracking instrument in their car – those who show “good driving” are offered a discount on their premium.

Psychological science can also help to address the problem from the enforcement side, helping police to target the right drivers at the right time. And it can inform the use of different technologies, such as photo radar, red-light cameras, and electronic message boards, in addressing driver aggression.

“Efforts to apply this information to modify driver aggression…are in their infancy but possess great potential for impact,” the researchers conclude.

So, if you’re driving long distances this holiday season, take some deep breaths and remember that, despite appearances, the other drivers aren’t all conspiring against you.

After all, it doesn’t matter how fast you can get there if you don’t get there in one piece!