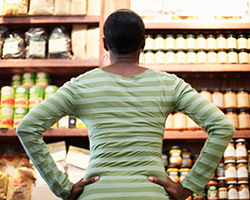 Have you ever noticed your attention gravitating toward the first or last item on a menu, or toward the centrally placed items on a grocery store shelf? Why does placement influence our choices and decisions? In a recent Perspectives on Psychological Science article, APS Fellow Maya Bar-Hillel (The Hebrew University of Jerusalem, Israel) tells the tale of how she came to better understand how position influences our choices and shares what she has learned about the circumstances under which people chose certain items.

In the early 2000s, Bar-Hillel supervised a doctoral student who was examining how test takers answer multiple-choice questions. The leading theory at the time was that when guessing, people choose randomly among answer choices and are thus equally likely to choose any of the answer choices given; however, Bar-Hillel and her student found that people were more likely to choose answers in the middle position of a list than choices in edge positions (i.e., choices placed at the beginning or end of the list).

Through further research Bar-Hillel discovered that this phenomenon occurred in other real-world situations. For example, when looking for items such as cereal in a grocery store, people are more likely to choose options from the middle of the display than from the edges of the display. From these examples, she concluded that people display a general “middle bias” (or “edge aversion”) when making choices from simultaneous displays: That is, they are more likely to choose middle options over edge options.

Later, when supervising another doctoral student who was examining how people make choices from menu items, Bar-Hillel expected to find this same middle bias but instead found that people had a small bias toward favoring items at the beginning and end of the menu list. She also found more exceptions to this middle bias rule, such as people’s propensity to pick candidates listed first on election ballots and the tendency for people to choose the last travel route offered over previously presented routes.

Bar-Hillel then had a series of insights into position effects that led her to reframe the way she thought about these disparate, confusing, and often conflicting findings. The first was that although information in simultaneous displays, such as menus, is presented visually all at once, people don’t read every item at the same time. Instead, people read the items one at a time; they read them sequentially. This tendency makes the list items that are read subject to serial position effects — the propensity to recall first and last items on a sequentially presented list better than those items presented in the middle of the list.

In addition, Bar-Hillel thought about the unique features of different types of decisions: For example, although menu items and multiple choice answers are both processed in a sequential nature, multiple choice test questions are essentially a game of hide-and-seek. The test maker and test taker are basically in competition, with the test maker trying to hide the answers to the questions and the test taker trying to find them. This type of competition is not present when reading menu.

These insights helped Bar-Hillel create a classification system for simultaneous choice which categorizes decisions based on whether the choice is interactive or not, whether sequential item processing is required, and whether the interaction involved — if there is interaction — is cooperative or competitive.

Although this general framework provides the typical effects that are seen in each of these four situations, choices and position effects are influenced by a variety of factors, leading to circumstances in which these generalities will not hold. While Bar-Hillel states that she is now more prepared to predict the outcomes of position effect studies, her story of understanding position effects continues to unfold.