Publications > Observer > Observations > Everyday Aggression: We Hurt Those Closest to Us

When we think of aggression, we might think of road rage or a bar fight, situations in which people are violent toward strangers. But research suggests that aggression is actually most often expressed toward the people we encounter in our day-to-day lives, such as romantic partners, friends, family, and coworkers. 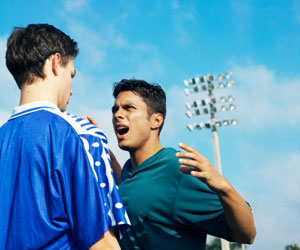 As Richardson explains, only a behavior that is intended to harm someone qualifies as aggression. Aggression shouldn’t be confused with assertiveness or ambition, which don’t necessarily intend harm, or with hostility or anger, which involve expressions of emotion but aren’t behaviors.

Using a questionnaire that she developed, Richardson and colleagues have been able to distinguish between different manifestations of aggression.

Data from the questionnaire have also provided some intriguing insights that seem to go against popular conceptions of aggression.

While aggression is generally associated with confrontational behavior, questionnaire participants actually report a preference for using passive rather than direct or even indirect aggression.

Research findings also suggest that romantic partners and friends bear the brunt of aggression overall, but that siblings are most likely to be on the receiving end of direct aggression.  People tend to confront their siblings, as well as romantic partners, face-to-face; when it comes to friends, however, indirect aggression, such as malicious gossip, is more common.

One question Richardson hopes to answer with further research is what the consequences of everyday aggression are.  Richardson suspects that everyday aggression may be caustic to both individuals and relationships; if this is the case, further research may help boost awareness of these consequences and provide us with tools that will help us hold our tongues—and our fists.

Publications > Observer > Observations > Everyday Aggression: We Hurt Those Closest to Us