Neuroimaging data collected from a group of passengers who thought they were going to die when their plane ran out of fuel over the Atlantic Ocean in the summer of 2001 are helping psychology researchers better understand trauma memories and how they’re processed in the brain.

A total of eight passengers agreed to undergo fMRI scanning while they looked at video recreation of the Air Transat incident, footage of the 9/11 attacks, and a neutral event. The participants ranged in age from 30s to 60s; while some had a diagnosis of PTSD, most did not. 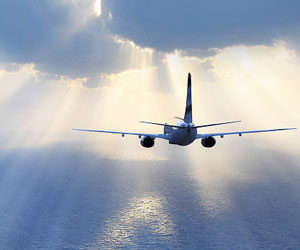 “This traumatic incident still haunts passengers regardless of whether they have PTSD or not. They remember the event as though it happened yesterday, when in fact it happened almost a decade ago (at the time of the brain scanning). Other more mundane experiences tend to fade with the passage of time, but trauma leaves a lasting memory trace,” said Daniela Palombo, the study’s lead author and currently a post-doctoral researcher at VA Boston Healthcare System and Boston University School of Medicine.  “We’ve uncovered some hints into the brain mechanisms through which this may occur.”

The participants’ showed heightened responses in a network of brain regions known to be involved in emotional memory – including the amygdala, hippocampus, and midline frontal and posterior regions — when they recalled their experience on AT Flight 236 compared to when they remembered a neutral autobiographical memory.

The passengers showed a similar pattern of heightened brain activity in relation to the 9/11 terrorist attacks, another significant but less personal trauma that occurred just three weeks after the Air Transat incident. This enhancement effect was not evident in the brains of a comparison group of individuals when they recalled 9/11 during their fMRI scan.

According to Palombo, the “carryover effect” may indicate that the Air Transat flight scare changed the way the passengers process new information, possibly making them more sensitive to other negative life experiences.

“Research on highly traumatic memory relies on animal studies, where brain responses to fear can be experimentally manipulated and observed,” said Brian Levine, senior scientist at Baycrest Health Science’s Rotman Research Institute, Professor of Psychology at the University of Toronto, and senior author on the paper. “Thanks to the passengers who volunteered, we were able to examine the human brain’s response to traumatic memory at a degree of vividness that is generally impossible to attain.”

In the first phase of the study, published in 2014, the research team found that all of the passengers who participated remembered a remarkable amount of detail for the Air Transat incident, regardless of whether or not they had PTSD, although individuals with PTSD tended to veer off topic and recall additional information that was not central to the events assessed.