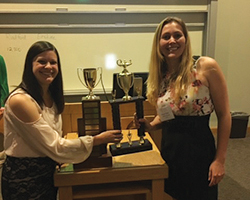 The APS Psychology Jeopardy contest was a big hit at the Carolinas Psychology Conference. The conference was held April 16 at Campbell University in Buies Creek, North Carolina, and drew nearly 200 attendees.

According to APS Fellow James Kalat, the Carolinas Psychology Conference began in 1977, sponsored by Meredith College and North Carolina State University. The psychology jeopardy contest has been an annual feature for approximately 20 years, and contestants are pairs of students from three colleges. The contest was created by Kalat, who writes the questions yearly. All the questions relate in some way to psychology. Some example categories from recent years include songs (the names of the song and the singer were provided, and the participants’ task was to sing the song), “not in the 1950s” (the screen displayed three events from the history of psychology and the participants’ task was to pick the one that was either earlier or later than the 1950s), Spoonerisms, and bad puns.

APS provided swag as well as 1-year student memberships to the six contestants. The winning team, comprised of Alyson Faires and Sarah Falkowitz, came from Radford College in Virginia.

A New Look at the Killing of Kitty Genovese: The Science of False Confessions

Kitty Genovese’s murder caught the attention of the public and psychological scientists alike, but new research indicates we’ve had the story all wrong for the last 50 years. More