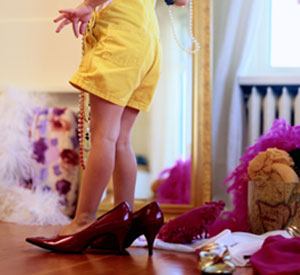 There is no denying that in Western society, youth is valued. It is estimated that in 2008, more than £16 billion was spent on anti-aging products the United Kingdom. In 2006, Americans spent over $45 billion on cosmetics, plastic surgery, and hormone therapy. Despite this massive effort to combat aging, there is little research on the social consequences of attempting to look younger.

Psychological scientists Alexander Schoemann and Nylar Branscombe (University of Kansas, Kansas, USA) investigated how young adults evaluate older adults who attempt to make themselves look younger. Most research has been done on in-group-out-group interactions. But age is a unique social category because members of a socially valued group (younger adults) will eventually become members of the other, devalued group (older adults).

In three experiments, the researchers evaluated young adults’ feelings towards the descriptions of two individuals: an adult who was trying to look younger and an adult who was not. Older adults who tried to turn back the clock, regardless of sex, were viewed negatively by young adults. Plus, older adults who were closer in age to the younger adults were perceived as more of a threat. For example, the researchers found that individuals in their thirties who attempt to look younger can be perceived as a greater threat to the social identity of young adults than would adults in their sixties.

People who want to recapture their youth are spending billions of dollars to conform to beauty standards, but rather than escaping from prejudice and discrimination, they can be perceived as deceitful. Attempting to look younger can not only break the bank, there are social costs as well.

I went with Honest Hair nearly a decade ago and what a relief! Ironically, as friends express admiration for my “flattering” salt-and-a-little-pepper coiffure, they counter with “Mine would never look that good!” So afraid are they. For me, it was such a relief and blow for freedom. I save a small fortune on salon services and expensive products, never have a concern about roots, and brassy tones are a thing of the past. I’m happy to look more or less my age, and if I’m often mistaken for being younger, it’s never because anyone thinks it’s contrived. Live natural, live honest, and write your truth!

The problem with this study is that it does not address the issue of ageism and how the stigma of aging influences hiring decisions and may even block advancement opportunities in certain job fields. I think that the perception of younger adults may depend on how the older adults are depicted. Coloring one’s hair may be perceived more negatively, if the color is garish than if it is a natural-looking color for the individual’s skin tone. I wonder if the participants were reacting to the written description, or if the researchers used photos of older adults? I also wonder if these photos compared reactions to older adults using sensible anti-aging strategies and those trying to look like teenagers.