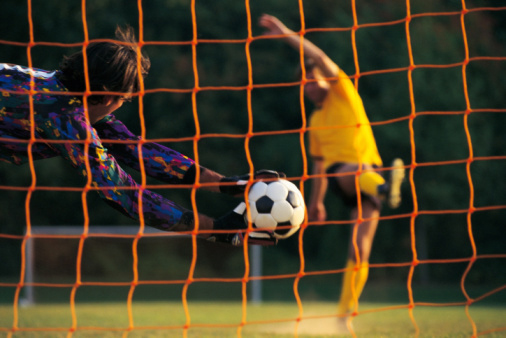 Throughout this world cup, we have seen plenty of penalty kicks. After 90 minutes of play and an additional 30 minutes of overtime, the fate of each team comes down to their ability to score a goal from only 12 yards away.

The penalty kick generates a variety of strong emotions in soccer (Carroll, Ebrahim, Tilling, Macleod, & Smith, 2002), and places the goalkeeper at such a disadvantage that only approximately 18% of penalty kicks are saved (Kropp & Trapp, 1999).

A study published in Psychological Science shows that it is feasible for a goalkeeper to influence perceptions of area and consequently the direction of penalty kicks by standing marginally to one side or another of the goal center.

The goalkeeper can then strategically dive to the side with greater area. This study found that the optimum displacement of the goalkeeper in real life is from 6 to 10 cm.

The penalty taker is unlikely to be mindful of a displacement in this range, but is at least 10% more likely to direct the penalty kick to the side with greater area than to the side with smaller area.  Can you believe 6 cm can help win a game, or better yet a World Cup?

Publications > Observer > Observations > 6 centimeters could win a game, or better yet a World Cup?!

From Aging to Aging Well

What does it mean to age successfully? An interdisciplinary group of scientists share some findings from physiological and psychological perspectives. More

Scientists from Europe and North America share the latest findings on the promise and limitations of video games, “smart” drugs, and other tactics that people are turning to for cognitive enhancement. More

It’s a little hard to tell what’s a failure and what’s just something that is shifting your life in a whole new direction. -Pema Chodron “I can’t do this.” Almost every graduate student experiences that moment — or hour or week or month or year — when she questions her More