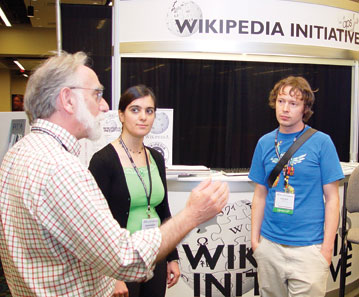 Robert Kraut (left) and Rosta Farzan (middle) from Carnegie Mellon University, along with Sage Ross (right) from the Wikimedia Foundation, discuss how the APS Wikipedia Initiative (APSWI) can help teachers incorporate Wikipedia into class assignments. Several demonstrations at the APS Convention showed faculty and students how to get involved in APSWI.

A lot of information is available on the Internet these days, but how accurate and how comprehensive is it? And even more important, how accessible is it to the general public? The APS Wikipedia Initiative (APSWI) is helping APS Members take charge of their science and ensure that Wikipedia, the most widely used general reference encyclopedia on the Internet, represents scientific psychology completely and accurately.

To help APS Members write, edit, and update Wikipedia entries, Robert Kraut and Rosta Farzan of Carnegie Mellon University developed a special online portal with resources and  links to Wikipedia articles. Kraut and Farzan, along with Sage Ross and fellow Wikipedian Piotr Konieczny, were on hand at the 23rd Annual Convention to discuss the APS effort and show attendees how to contribute to the initiative.

In several demonstrations during the meeting, attendees were shown how to use the Wikipedia portal and taught how Wikipedia can be used in the class room. Registering with the APS portal is simple, and after registering, editors are assigned to groups based on their interests. In addition to being able to create new articles, users can see what articles have been written in their fields, what other APSWI editors are working on, and what articles still need work.

Through APSWI, psychology faculty and students from all fields create new articles and review existing ones on Wikipedia. Existing articles are reviewed to make sure they’re accurate, cover the topic in as full and impartial a manner as possible, are interestingly and accessibly written, and are documented with reliable sources. Editors can also create new articles for topics that haven’t been covered. Articles can be about broad fields (such as social identity), important psychological scientists (such as William James), and specific topics (such as Gabor patches). There are currently about 5,500 psychology-related articles on Wikipedia, but only 30 percent have been peer reviewed, and only 2 percent of those were rated A or B by APSWI editors.

Like science itself, the mission of keeping information accurate and up-to-date will always be an ongoing process, and the many fields of psychological science will be better represented and more accessible. So far, APS Members have edited and updated more than 500 Wikipedia entries. You can join the effort and take charge of your science at www.psychologicalscience.org/apswi.