The fundamental goal of human life is the same now as it was during the Stone Age — survive and reproduce. Easy enough, right? Wait, not so fast. As APS Fellow Todd Heatherton demonstrated in his address at the 22nd Annual APS Convention, “Giving in to Temptation: The Neural Basis of Self-Regulation Failure,” the Stone Age brain did not anticipate the advent of fast food, cigarettes, and Playboy. 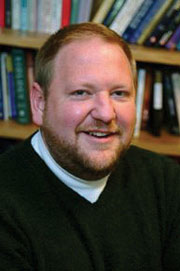 At the personal level, humans are inclined to eat, have sex, and use drugs because these things simply “feel good.” However, as Heatherton, from Dartmouth College, pointed out, these behaviors can be viewed as unsavory when performed in excess and, “at the group level, we reject people who are obese and we stigmatize addicts, rapists, [and] freeloaders.” Therefore, individuals are motivated to regulate their own behavior in order to avoid group exclusion and ultimately ensure survival. “We try to control things like our thoughts and emotions,” he said, “and sometimes we have great difficulty with that.”

Using a cue-reactivity paradigm, in which subjects were shown a series of images, including neutral scenes, foods, and sexual situations, Heatherton and his colleagues have been able to specifically study self-regulation failure with regard to eating, drug use, and sexual activity at both the behavioral and neuroanatomical levels. Through this, Heatherton illustrated the “What the Hell Effect” of dieting—dieters who drank a milkshake at the beginning of an experiment later chose to eat a greater amount of ice cream than dieters who began the experiment with a glass of water.

Interestingly, functional neuroimaging data revealed that, compared with non-dieters, dieters initially exhibit lower activity in the nucleus accumbens (NAcc; a subcortical region commonly associated with reward) in response to food cues. Although this indicates that the dieters are somewhat effective in exercising self-control, everything changes once they are given a milkshake. Whereas a non-dieter’s NAcc response to food cues decreases after drinking the milkshake (i.e., due to satiation), a dieter’s NAcc response tends to skyrocket, thus indicating that food actually becomes more rewarding once dieters “give in.”

It may seem obvious to yo-yo dieters that food restriction inevitably leads to overeating. However, according to Heatherton’s most recent work, emotional restriction and social rejection can also be a dieter’s downfall. “When people are feeling dysphoric, that’s when they overeat, that’s when they gamble,” stated Heatherton, “and the things people are trying to avoid have the potential to be viewed as more rewarding.”

Normally, the prefrontal cortex is charged with behavioral regulation, but when subcortical regions dramatically increase their activity, these frontal control mechanisms cannot keep up. “The regulation is on, it’s just not working as well when you’re stressed,” Heatherton concluded. Sometimes our brain seems to work against us even when our intentions are the best, something that’s reflected in the motto adopted in Heatherton’s lab:   “Who says self-control is a good thing?”