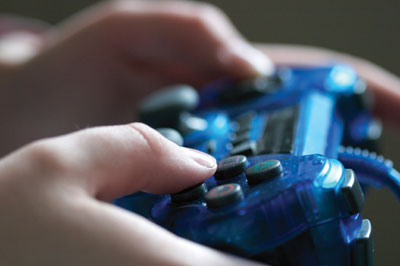 Playing video games for hours on end may develop skills in childhood that could be useful when training to be, for example, a laparoscopic surgeon, a new study shows. The reorganization of the brain’s cortical network in young men who have significant experience playing video games may give these individuals an advantage not only in playing the games but also in performing other tasks that require visuomotor skills, according to findings published in the October 2010 issue of Cortex.

The subjects were placed in a functional magnetic resonance imaging (fMRI) machine and asked to complete a series of increasingly difficult visuomotor tasks, such as using a joystick or looking in one direction while reaching in another direction.

“By using high resolution brain imaging (fMRI), we were able to actually measure which brain areas were activated at a given time during the experiment,” said Lauren Sergio, Associate Professor at York University’s Faculty of Health. “We tested how the skills learned from video game experience can transfer to new tasks, rather than just looking at brain activity while the subject plays a video game.”

The finding that using visuomotor skills can reorganize how the brain works offers hope for future research into the problems experienced by Alzheimer’s patients, who struggle to complete the simplest visuomotor tasks.
Lead author Joshua Granek added that, in the future, it would be interesting to study if brain-pattern changes are affected by the type of video games played and the total number or hours played, as well as to study female video gamers, whose brain patterns appear to differ from those of males.

This research is published in the November 2010 issue of Cortex, edited by Sergio Della Sala, President of the Federation of the European Societies of Neuropsychology.

This professor of psychiatry and neurology leads a longitudinal biomarker study of early-onset Alzheimer’s disease.

Scientists from Europe and North America share the latest findings on the promise and limitations of video games, “smart” drugs, and other tactics that people are turning to for cognitive enhancement.