One of the many problems with null hypothesis significance testing (NHST) is that it encourages dichotomous thinking: Either an effect is statistically significant or it’s not (Kline, 2004). Using a p value to merely test if there is a significant difference between groups does little to progress science.  Surely a more informative and interesting question to ask is “How big is the effect?” or “How strong is the relationship?” CIs give us a method for answering such questions.

A good way to think about a CI is as a range of plausible values for the population mean (or another population parameter such as a correlation), calculated from our sample data (see Figure 1). A CI with a 95 percent confidence level has a 95 percent chance of capturing the population mean. Technically, this means that, if the experiment were repeated many times, 95 percent of the CIs would contain the true population mean. CIs are ideally shown in the units of measurement used by the researcher, such as proportion of participants or milligrams of nicotine in a smoking cessation study. This allows readers to assign practical meaning to the values (Cumming & Finch, 2005).

Figure 1: You can be reasonably sure that the population mean will be somewhere in the range shown by the CI.

CIs not only give the reader an easy-to-interpret range estimate of the population mean, they also give information about the “precision” of an estimate. Think of precision as a measure of uncertainty associated with our estimate. An uncertain estimate using a 95 percent CI would be quite wide, whereas a more certain estimate using a 95 percent CI will be much smaller and therefore more precise.

CIs can also be used to test hypotheses when necessary. Any point outside the 95 percent CI can be used as support in rejecting the null hypothesis at p < .05, two-tailed. If you widen the CI to 99 percent, any point outside the interval implies statistical significance at p < .01, two-tailed. You can easily estimate a p value from a CI; however, you cannot estimate a CI from a p value. Essentially, CIs offer everything that p values offer and far more.

Planning an Adequate Sample Size for a Precise CI

Researchers often express concern about avoiding wide CIs. Wide CIs mean that there is not enough data or that the data are too variable to make a precise estimate. Proper planning can increase the likelihood of a precise interval. Much like an a priori power analysis, a researcher can estimate the number of participants required for a desired expected width. The simplest method for planning the width of your CI is the precision approach, in which you place the standard deviation (or an estimate if it is unknown) and your desired margin of error (the half width of your CI) into the following equation:

N is the number of participants, δ is the standard deviation of the population, Z is the Z score for the level of confidence (for example, 1.96 for a 95 percent CI), and W is the margin of error of the CI. This margin of error will be your desired half width in the units in which you are measuring your dependant variable (e.g., meters, points on a depression scale, or a standardized effect size such as Cohen’s d). This equation can replace the use of a power calculation to determine sample size. 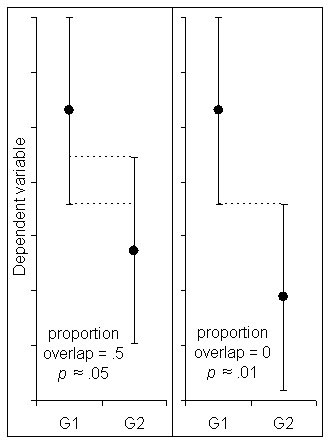 Fidler, F. (2005). From statistical significance to effect estimation: Statistical reform in psychology, medicine and ecology. Department of History and Philosophy of Science, University of Melbourne. Retreived from http://www.botany.unimelb.edu.au/envisci/docs/fidler/fidlerphd_aug06.pdf.

Pav Kalinowski is a PhD student in statistical cognition at La Trobe University, Melbourne, Australia. His research focuses on the teaching, understanding, and interpretation of Confidence Intervals.