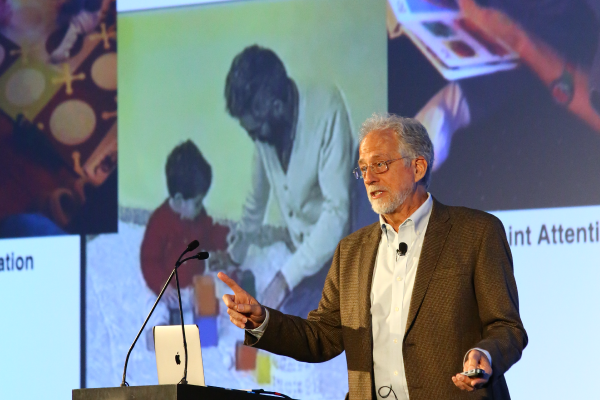 Despite being among neither the fastest nor the largest species on Earth, humans occupy a uniquely dominant position. Yet many of the characteristics once thought to account for this dominance — culture, morality, language — have reportedly been found in our nearest living relatives, the great apes. And so the question remains: What really makes us different?

Michael Tomasello outlined his theory of what separates humans from other primates in his Fred Kavli Keynote Address at the 31st APS Annual Convention in Washington, DC. He acknowledged that great apes possess a general capacity for higher level cognitive and social processes but posited that when we drill down into just how they do those things, the differences between humans and apes become more apparent. Despite their remarkable cognitive abilities and capacities for social relationships, great apes are not built for cognitive and social coordination with others in the same way as humans, Tomasello said.

He has posited that a dual-level schema of shared intentionality enables humans to share goals and other mental states with others and, at the same time, to coordinate their individual roles and perspectives within such acts of collaboration and communication.

“This is a kind of dual-level engagement that I believe is unique to the species, that enables us to put our heads together, to accomplish things together that we can’t accomplish alone,” Tomasello said.

To explore this idea, Tomasello and his colleagues have designed experiments in which children ages 1 to 3 must work together with another child or an adult experimenter to complete a task to obtain a reward — one that they would not be able to attain on their own. For example, a long rope was looped through two ends of a plank such that each participant had to pull his or her end of the rope to move the reward-containing plank toward them; pulling on one end of the rope just slid it out of the loops, preventing the plank from moving at all. He compared the outcomes of these scenarios in children of different ages with those of one of humans’ closest evolutionary relatives, chimpanzees.

When the task required collaboration but delivered a reward to one subject before the other, 3-year-olds tended to continue in the task until their partner received their reward. Chimpanzees, however, bailed as soon as they got their prize, without regard for their bereft partner, suggesting their collaborative behavior was simply a means to an individual end. Three-year-olds also engaged in normative protest when their partner wasn’t executing the task correctly, instructing the partner that they must do it a certain way. They also tended to offer an excuse for abandoning a joint activity rather than just leaving, acknowledging their responsibility to their partner.

These findings indicate that at 3 years of age, children are already able to understand the idea of a joint goal and the joint commitment that they have made to that goal. They hold each other accountable, not just on a personal level (e.g., “I want you to do it this way”) but on a normative one (“you ought to do it this way”).

“What children have accomplished by age 3 is a kind of collaborative engagement with a partner in which ‘we’ self-regulate each of the two of us,” Tomasello explained. “It’s a ‘we’ over ‘me,’ normative self-regulation.”

Implicit in this kind of joint commitment is the notion that just as the work should be divided equally, so should the rewards. Tomasello and colleagues found that chimpanzees collaborated on these types of cooperative tasks only if the rewards were predivided for them on the two ends of the plank. However, if food was placed in a single bowl in the middle of the plank, the dominant partner took all the food and the nondominant partner very quickly stopped participating. No sense of equal deservingness here.

In contrast, 3-year-old children tended to share the spoils equally and even took corrective measures to ensure that outcome. Even if one took more than his or her share, protest from the partner tended to spur corrective measures. If the collaborative element was removed — if the children walked into the room and the reward was unfairly split between them without requiring them to complete a task together — the children seldom shared fairly. This suggests that humans’ sense of normative fairness is grounded in collaborative engagement, especially as structured by joint commitments.

“The cooperative engagement leads children to this kind of normative moral interaction and relationship to one another,” Tomasello said.

On the cognitive side, in this same task, children as young as 18 months exhibited an understanding of their partner’s role in the collaboration; they knew how to coordinate what they had to do and what their partner had to do to accomplish the goal.

“They’re monitoring and simulating from both perspectives,” Tomasello explained. Apes lack this bird’s-eye view of the situation, only ever grasping their own role in a task.

Cooperative communication is another ability that Tomasello has found to be present only in humans. Apes have the ability to follow another’s gaze and thus can be directed to a target, such as a pile of food, by a person pointing at it. However, if the target is concealed under an upturned bucket, for example, they cannot infer the meaning of the pointing. Humans as young as 12 months old, on the other hand, can infer that their partner is trying to give them information to help them achieve their goal.

Tomasello calls this a recursive inference, which requires mental coordination of different perspectives that go beyond the kind of straightforward “mind reading,” or a basic understanding of what one’s partner knows, in which apes can engage.

“This embedding of one mental state in another — ‘she intends for me to know something’ — I don’t think apes do,” he said.

Tomasello believes that these simple comparative experiments bring the picture of human uniqueness into sharper focus. Our capacity for taking others’ perspectives, and our ability to regulate our behavior normatively, single us out as an especially collaborative species. And ontogeny is important: Humans are endowed from birth with psychological capacities for engaging with others cooperatively in unique ways, but only through social interactions do these capacities develop, he explained.

This is an excellent paper which explains and illustrates Tomasello’s developmental theory of joint intentionality or we-ness in a way which can be meaningfully integrated into theories of intersubjectivity in other areas of cognitive science, such as enactivity (which is mostly absent in American Psychology). Tomasello’s strong American and European backgrounds make this possible. [Even unto Wittgensteinian comparisons.]