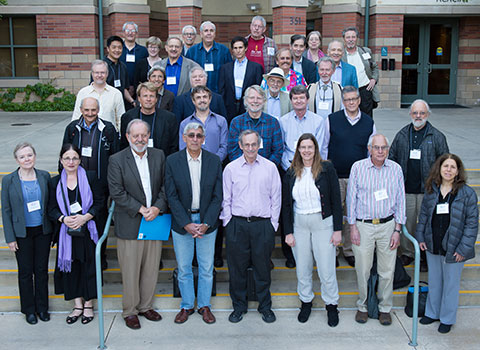 Thirty-two members presented talks at the 109th Annual Meeting of the Society of Experimental Psychologists.

The 109th Annual Meeting of the Society of Experimental Psychologists (SEP) was held at the University of California, Los Angeles (UCLA), April 10–12, 2014. Barbara Knowlton of UCLA served as chair of the event. At the meeting, it was announced that APS Fellow Gordon Logan of Vanderbilt University was winner of the society’s Howard Crosby Warren Medal “for his innovative and penetrating theoretical and empirical work in attention, automaticity and skill acquisition, executive control, and neural mechanisms of information processing.” APS William James Fellow David Meyer of the University of Michigan was winner of the society’s Norman Anderson Lifetime Achievement Award “for his pioneering contributions to the understanding of word recognition, the control of aimed movements, and the cognitive architecture underlying dual-task performance.” APS Fellow Tania Lombrozo of the University of California, Berkeley, was the recipient of the society’s Early Investigator Award “for her ground-breaking research on how people conceptualize the world and seek and evaluate explanations.”

Topics at the meeting included how neural oscillations track the quality of working memory, affordance as an ontology for all organisms, neural models of social cognition and tool-use learning, optimal procedures for eyewitness identification, a quantum-probability account of a robust and mysterious finding involving survey responses, how second-language learning impacts one’s native language, and evidence for memory-based decline as early as the third decade of life.