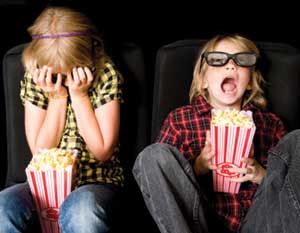 There is something about the rhythm and texture of early cinema that has a very different “feel” than modern films. But it’s hard to put one’s finger on just what that something is. New research may help explain this elusive quality. Cognitive psychologist (and film buff) James Cutting of Cornell University, along with his students Jordan DeLong and Christine Nothelfer, decided to use the sophisticated tools of modern perception research to deconstruct 70 years of film, shot by shot. They measured the duration of every shot in every scene of 150 of the most popular films released from 1935 to 2005. Using a complex mathematical formula, they translated these sequences of shot lengths into “waves” for each film. Specifically, they looked for a pattern called the 1/f fluctuation. The 1/f fluctuation is a concept from chaos theory, and refers to a pattern of attention that occurs naturally in the human mind. Indeed, it’s a rhythm that appears throughout nature and in music, engineering, economics, and elsewhere. Cutting and his students found that modern films — those made after 1980 — were much more likely than earlier films to approach this universal constant. That is, the sequences of shots selected by director, cinematographer and film editor have gradually merged over the years with the natural pattern of human attention. These researchers believe the relatively young art form has gone through a kind of natural selection, as the edited rhythms of shot sequences were either successful or unsuccessful in producing more coherent and gripping films. The most engaging and successful films were subsequently imitated by other filmmakers, so that over time and through cultural transmission the industry as a whole evolved toward an imitation of this natural cognitive pattern. Overall, action movies are the genre that most closely approximates the 1/f pattern, followed by adventure, animation, comedy, and drama. But as Cutting, DeLong, and Nothelfer report in the study in Psychological Science, individual films from every genre have almost perfect 1/f rhythms.