The next big thing in psychological science just may be network analysis. In a packed ballroom with over a hundred in attendance, four psychological scientists discussed the opportunities for studying networks and demonstrated how networks can uncover new trends, in disciplines ranging from social psychology to molecular neuroscience. 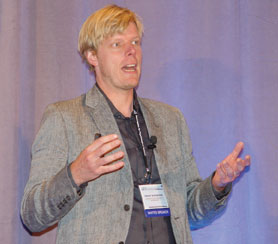 Psychometrist Denny Borsboom, University of Amsterdam, kicked off the Connected theme program talking about how networks could provide new insight about the symptoms listed in the Diagnostic and Statistical Manual of Mental Disorders. Borsboom argued that a disorder arises not from a single underlying cause but from interactions between various symptoms in a network. The network, he said, is similar to a flock of birds.

“Now, a naïve person may perhaps think there is a latent bird flying behind [the other] birds saying ‘Go up! Left! Down! Down! You, up!’” said Borsboom. “Of course, there is no latent bird. The birds work together as a system, but not because they rely on an underlying property. They work together because they are held together by a simple, local interaction.”

In addition to creating networks that show how symptoms from different mental disorders are connected, Borsboom has also developed symptom networks for individuals. Borsboom showed animated networks: one from a mentally stable person and another from a person suffering from bipolar disorder. The network for the stable person had relatively smooth movement, whereas the bipolar person’s network moved in a disjointed, chaotic dance. “You can now think of people as having different network structures,” said Borsboom. “And if you follow them over time, a new window for investigating disorders opens up.” 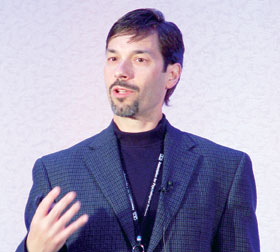 Turning the focus to connections between individuals, Giuseppe Labianca, University of Kentucky, shared his investigations of social networks. Labianca’s goal is to use networks to understand how organizations actually function as opposed to how most people believe they function. In a striking example, Labianca shared some data from an analysis of relationships between business schools. He pointed to an isolated cluster and asked which schools the audience thought the cluster represented. Most people said Ivy League schools, but it turned out that the cluster represented all of the public schools west of the Rocky Mountains. “That’s one of the values of taking a network perspective,” said Labianca. “All of a sudden, you realize your own bias as a researcher.”

Labianca has also used networks to study gossip. Although gossip may seem like a trivial topic, Labianca said that it provides a lot of insight into how organizations really function. Through his work, he has found that frequent gossipers tend to be influential in work environments, but they also receive lower performance evaluations. He has also shown that men and women are equally likely to gossip, even though men tend to claim that they do not gossip. And guess who the biggest gossips are? It’s the managers, not the secretaries. The reason for this, Labianca said, is that gathering information on employees is a central part of a manager’s job.

Olaf Sporns, Indiana University at Bloomington, took the discussion into the field of neuroscience, explaining recent efforts to map connections in the human brain. “Brain networks are organized on multiple scales,” he said.  “And they can be used to capture structural and dynamic aspects of brain architecture.”

Sporns specifically focused on discussing the progress that has been made in the human connectome project, a complete map of the connections in the human brain. According to Sporns, there have been advances in linking together functional and anatomical features of the brain, but the current map is like a map of the world from the 1600s — some areas have a lot of detail (like Europe) and others are still a mystery (the Americas).

Yet some patterns in how the brain is wired are emerging. Sporns said that researchers have found evidence for “communities” in the brain, where neurons form hubs that perform specialized functions. Learning more about these communities could help scientists determine which connections are affected by certain types of brain damage. Sporns even suggested that the accumulated knowledge about neural connections in the brain could someday lead to brain treatments that allow clinicians to restructure an individual’s brain architecture. 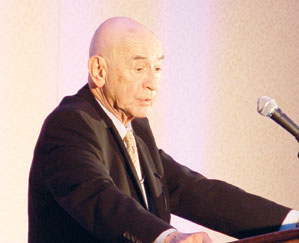 The symposium ended with enthusiastic comments from Columbia University psychological scientist and APS Past President Walter Mischel. “We now have, through network models, through network analysis, through the thick data that are offered in the kinds of presentations we heard today, a route for capturing the structure and organization of individual differences,” said Mischel. “Networks provide a way to situate a person within his or her relevant psychological situations and life space, rather than treating us as entities that stumble around the world unconnected.”

Mischel further discussed his hopes that network analysis could be used to compare individuals who have similar or dissimilar networks instead of looking for individual personality traits. The current methods, he believes, are “spectacularly wrong,” and trait psychology could benefit greatly from studying networks. Using networks, said Mischel, will also be necessary to gain a complete understanding of how the social world truly functions.

Ultimately, Mischel expressed excitement about the future of network analysis in psychology. He believes that these methods will be a positive force in the field and will help form connections between various disciplines.

“I think the theme of convergence, which the program has focused on, is absolutely crucial,” he said. “I really think we’re moving in a direction where the action, where the funding, and where the most exciting developments are in looking — now that we have the methodological opportunity to do so — at the connections between what goes on in mind, in brain, in cognition and emotion, in social behavior, and the social world.”

Observer > 2011 > July/August > The Many Faces of Network Analysis

If you are interested in how people learn the structure of networks, I blog about my research in that area at http://shotgunapproach.wordpress.com/

If you’d rather read a more formal paper, my papers are available at my SSRN author page:
http://ssrn.com/author=1516755