“Creatures inveterately wrong in their judgments and subsequent decisions have a pathetic but praise-worthy tendency to die before reproducing their kind.”

I was hoping to slink into the ballroom at the Sheraton Boston hotel unnoticed to catch the first theme program of the APS 22nd Annual Convention, Living on the Edge: A Guide to Risky Behavior. As it turns out, I had tempted fate by pressing the snooze button one too many times and was now running late. But as I made it to the ballroom, I realized I wasn’t the only attendee hoping to find some insight into others’ (and my own, apparently) risky behavior. I looked out across an ocean of seats, not one of which seemed accessible. With a quick glance to one of my standing-room-only compatriots, I resigned myself to a corner in the back as Alvano Pascual-Leone, Harvard Medical School  and chair of the program, walked to the podium to kick off the program. 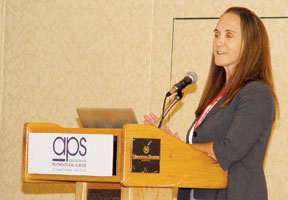 Although the term “risky behavior” may elicit images of skydivers or rogue stock traders, we all weigh certain risks and rewards before initiating a plan of action. And all things being equal, we’re usually willing to risk some sort of consequence if the potential payoff is great enough. It makes strong evolutionary sense for individuals to stick their necks out from time to time but, as Quine pointed out, those who falter in their assessments of risk are unlikely to be around to propagate their DNA. Learning about the psychology and cognitive neuroscience of this risky behavior not only teaches us about a fundamental characteristic of humans, but may also guide interventions for pathology that result in excessively risky, dangerous behaviors or, conversely, in excessively cautious, risk-averse behaviors.

Where risky behavior could have meant approaching the nearest sabertooth tiger for our ancestors, today it takes far different forms. And not all risks and risk-takers are created equal. APS Board Member Elke Weber, Columbia University, points out that risk-taking behavior largely depends on the “when” and the “who.” For instance, a risk to one’s health (say, not wearing a seatbelt) is decidedly different from taking a social risk (say, going to the prom without a date). Take into account culture and the source of the outcome knowledge (“OMG,” according to Becky, who went alone to prom, “going through a windshield is soooo much better”) and risky choices become much more complex than a case of neural activation. Not only that, says Weber, but certain groups are far more prone to risky behavior than others. Adolescents, in particular, systematically take more risks in nearly every domain than their adult counterparts. If that particular adolescent is male (males also out-risk females), then they are extremely prone to taking risks. Excuse me for a second while my adolescent life flashes before my eyes.

A particularly fertile ground for conducting research on risky behavior is the realm of economics. Donald Hantula, Temple University, provided some reasoning as to why we stick with choices that involved considerable financial or emotional commitment, whether they are stocks, wars, or NFL quarterbacks, despite minimal returns. Many researchers have explained this phenomenon, deemed escalation of  commitment, by suggesting that individuals will do anything to maintain psychological peace of mind. Hantula has demonstrated that individuals are not necessarily justifying some bad choices but instead stick with their choices when there is little information available about the current choice, or  about better alternatives. In this sense, individuals are not making mistakes, but are acting in adaptive ways to use what little information they can to make choices. 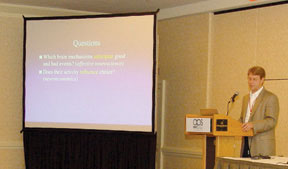 Jane Joseph, University of Kentucky, has capitalized on new technologies such as fMRI to pinpoint the areas of the brain — the nucleus accumbens and anterior insula — that are involved in risky decisions. Brian Knutson, Stanford University, has taken a similar approach in examining how our willingness to take chances changes based on our emotions. His research supports an anticipatory affect model — that is, brain activity that correlates with risk-taking comes before any behavior actually occurs. So, when we see potential rewards (say, the possibility of winning a jackpot at the slots), activity in the nucleus accumbens goes into high gear. If our positive arousal increases (it’s a progressive jackpot that keeps rising and rising) so does activity in this region. Tracking this anticipatory affect can provide incredibly important knowledge as it “can be applied to predicting choice, not merely explaining it,” according to Knutson. 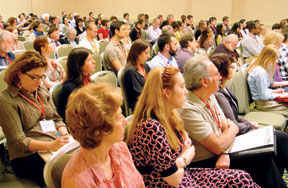 There was no risk of an empty room at the Living on the Edge: A Guide to Risky Behavior Theme Program.

Risky behavior is indeed a complex process that humans have honed over centuries of evolution. A careful balancing of pros and cons can easily be thwarted, however, under the influence of drugs and alcohol. Scott Lane of the University of Texas Health Sciences Center in Houston (and source of the Quine quote at the symposium) has demonstrated that risky behavior increases when individuals are under the influence of alcohol or drugs, confirming the association between intoxication and numerous harmful outcomes (motor vehicle accidents, violent crime, and sexual assault to name a few).

We’re all risk-takers in some form or another. In fact, if our ancestors hadn’t pushed the envelope once in a while, we probably wouldn’t be here. But please: Refrain from any consequential decisions if you’ve had one too many. And beware the snooze button.