Observer > 2013 > November > The Biggest Brain (Sculpture) in the World 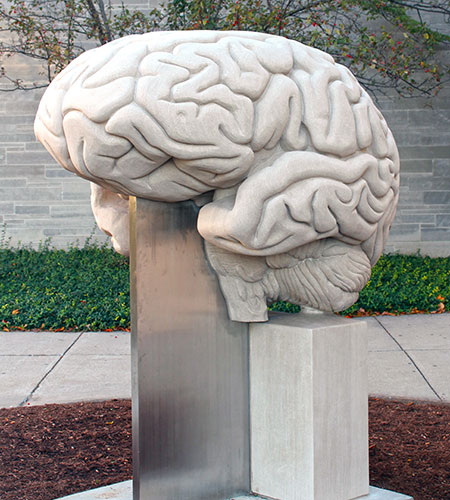 Indiana University Bloomington (IUB) now holds bragging rights to the world’s largest anatomically correct sculpture of a human brain. The sculpture made its public debut during the festivities that celebrated another set of bragging rights held by IUB: The university’s psychology department celebrated its 125th anniversary this month, making it the oldest psychology department in the United States.

Amy Brier, a sculptor, and a team of carvers led by Mike Donham of Accent Limestone, collaborated to design and build the 5-ton brain, which stands 7 feet tall. The sculpture was underwritten by the Harlan Family Foundation.

“There are a lot of big brains on this campus,” university Provost and Executive Vice President Lauren Robel said at the dedication of the sculpture. “But this one takes the cake.”

Observer > 2013 > November > The Biggest Brain (Sculpture) in the World

Actually, this may be the largest limestone sculpture of the brain, but the 22 fiberglass brains that we had on display in Bloomington and on IU campus for the Brain Extravaganza were larger!