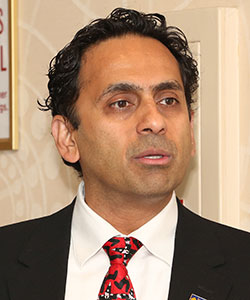 Regan A.R. Gurung thinks of students’ learning using the metaphor of a pearl in an oyster. During the Opening Plenary of the 2015 APS–Society for the Teaching of Psychology Teaching Institute, the University of Wisconsin–Green Bay psychological scientist said that just as a pearl is created by an irritating foreign body being enveloped in layers of nacre by the oyster, so do new ideas become thoughts and engagement in the minds of students. It is the role of the educator to start this process, Gurung said.

“Let us be the irritant that makes students think and react,” he said.

The pearl that develops is lifelong learning. In order to cultivate valuable learning, educators must consider how we define it, the factors that influence it, and the strategies that facilitate it, he added.

Students do not enter the classroom as blank slates, but rather as individuals with their own life experiences and beliefs. The pearl metaphor represents the concept that new ideas must be made to fit into the existing structure of a student’s prior knowledge and must be made relevant in the broader context of life outside the classroom; lifelong learning involves thinking and active engagement beyond simply memorizing content, Gurung said. Too often, he believes, educators assess performance rather than real learning in the classroom (Soderstrom & Bjork, 2015). Learning is defined as making relatively permanent changes to understanding, yet two years after taking an introductory course, psychology majors remember only 60% of the material on average (Landrum & Gurung, 2013).

Teachers strive to create an educationally transformative experience for their students in which they learn content and are successful not just in college but also beyond. Students often want something different. As presented in the book Making the Most of College: Students Speak Their Minds by Richard J. Light, college students report that their foremost goal is to build social connections. This compelling need for social connection may explain why they cannot resist responding to texts on their smartphones during class. Teachers need to be aware of how the need for social connection affects the classroom environment, to develop their own social connection with students, and to align their teaching goals with life beyond the classroom.

It is also important for teachers to consider what kinds of skills employers seek: They most frequently look for individuals who can listen, learn new things, and get along with others (Miller & Carducci, 2015). Gurung argues that professors place too much emphasis on academic content and not enough on helping students develop broader skills that they can use in other contexts.  Employers, he notes, are often seeking candidates who have strong listening skills and a flair for getting along with colleagues.

To bring about true learning, professors need to look beyond one class and even beyond academia to think more critically about assessment. Rather than just testing students’ ability to recall memorized facts, assessment should focus on the “learning bottlenecks” that occur around some foundational concepts in psychology (Gurung & Landrum, 2013).  These bottleneck concepts — for example, the scientific method — are critical benchmarks for learning that students often struggle to master, sometimes as a result of overconfidence. In order to assess learning accurately, teachers must examine individual factors such as motivation, study habits, ability, effort, and self-efficacy. In a meta-analysis published in John Hattie’s book Visible Learning, 50% of learning variance was attributable to student characteristics and another 25% to teacher characteristics.

Finally, teachers must develop strategies to activate learning. Gurung recommends getting feedback from students about what they are learning as soon as possible by asking comprehension questions and giving quizzes from the beginning of the course. He also suggests being transparent so that students will not be surprised by having to work hard. Gurung concluded by urging teachers to be FIRM: Facilitate learning, Introduce techniques that facilitate learning, Reward their use, and Mandate their use.