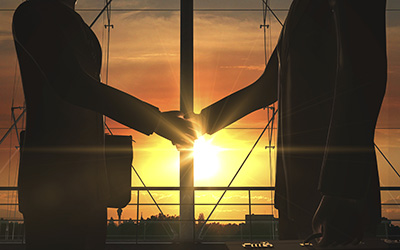 You’ve spent hours preparing for the job interview. You’ve tried to anticipate everything your potential new employers may ask you. You think hard about every detail: Remember to sit up straight, look them in the eye, give a firm handshake, tell them what they want to hear.

But despite all the effort you spend trying to make a good impression, the interview might be over the second the recruiters first lay eyes on you.

Before we can finish blinking our eyes, we’ve already decided whether we want to hire, date, hate, or make friends with a person we’re encountering for the first time. These first impressions color the way we interact with other people from that point forward. And all of this happens outside of our awareness, in the unconscious processes of the mind, research shows.

The human tendency to, as the old idiom says, judge a book by its cover, has become a source of extensive psychological study.  The science of snap judgments is more than just figuring out what we can tell by looking at each other. Knowing how people size each other up from day to day has significant implications for identifying and subduing implicit bias, discrimination, and stereotyping.

Whether we’re selecting a cashier at a grocery store or picking players for a neighborhood ball game, we go through a detailed and complicated process of noticing cues that give away other people’s traits, and then we unconsciously run a series of calculations to make predictions about how they might act.

Even in cases where we already have a lot of information, a snap judgment overpowers decision making. Billions of dollars are spent annually across the globe to advance political campaigns. Voters and the media scrutinize a candidate’s platform, voting record, experience, and qualifications. But studies have shown that when we step into the voting booth, the candidate’s face drives our decision. In a study published in 2005, students at Princeton University were shown photos of candidates from the last three US Congressional races. As each pair of candidates came up on the computer screen, the students were asked to judge who looked more competent. On average, the students picked the actual winner of the election almost 70% of the time.

Evidence points to accuracy in some of the snap judgments we make about other people. Telling whether someone is extroverted or shy is easy. Multiple studies have shown that judgments of someone’s extroversion made by looking at that person’s photograph (even for just 50 milliseconds) predict how extroverted he or she actually is. But we’re also quick to make accurate judgments about facts that seem a lot more difficult to predict, such as the amount of money a chief executive is going to make for the company in a given year, or someone’s romantic attraction toward us. For example, personality traits inferred from the faces of executives predict their leadership skills, measured in terms of bottom-line profits, and the effects are just as strong whether the photo is current or was taken in the leader’s college days.

Studies have shown that women’s sexual attitudes and behaviors can be accurately judged from 5-minute video clips and even from photos of their faces. Along similar lines, seeing a flash of a face for just 40 milliseconds — 10 times faster than the average eye-blink — was all many study participants needed to tell if a man was gay or a woman was a lesbian, and thinking about it longer actually made their so-called “gaydar” less accurate. Experimental participants who saw faces for a fraction of a second were just as accurate as those who were given all the time in the world. When they were told to think carefully about their decision (versus going with their gut) they choked, producing results no better than chance guessing.

The Importance of Awareness

Aside from making for good conversation at the water cooler, though, why do scientists care enough to spend their time and everyone’s money (most of these studies were funded by taxpayer dollars) studying things like “gaydar”? The science of snap judgments involves much more than just figuring out a handful of interesting facts about what we can tell by looking at each other. Knowing how we slice people up from day to day helps us understand the way that the mind and brain work and what this might mean for society at large.

Most of the time we do this unconsciously or by intuition, underneath the ideas we hear ourselves thinking in our heads. Sometimes these gut feelings about another person are sensible: “She looks friendly. I’ll ask her for directions.” Other times, though, those feelings can be riddled with unsupported assumptions, biases, and stereotypes that tarnish our behaviors, interactions, and decisions: “He looks honest. I’ll invest with him.” Our parents may have taught us not to judge a book by its cover. But even if the cover doesn’t always tell the truth, the title printed on the cover might. Studying the science of snap judgments helps us to know which feelings to listen to and which to ignore.

Understanding the ways our minds put together information about other people not only alerts us to how other people judge us at first sight, but also helps us avoid making bad choices when evaluating other people. We like to interact with people we can understand, with whom we have enough common ground to have a conversation. The thought of new ideas, new looks, and new people can be exciting — but they can’t be so different that we feel unsafe with them. And we don’t realize how much this drive for commonality influences our decisions.

Imagine, for example, that you’re interviewing someone for a job in your lab. After eliminating applicants who lack the right skills or experience, you find yourself left with a small group of candidates who are all equally qualified. In making a final selection, you try to ask each candidate some clever questions, make inferences about each person’s work ethic, read between the lines in letters of recommendation, and compare numbers (grade-point averages, standardized test scores). Then you discover that the candidate seated across the desk in your office shares your love of zombie movies, that she also used to spend her summers camping in New Hampshire, or that her sister used to date your best friend’s cousin. You now see her not only as a highly qualified applicant but also as someone with whom you can gossip, reminisce, or even catch a movie after work. She’s got a subtle advantage over the other applicants because she can offer you something you’re not even aware you’re seeking.

Of course, the interpersonal connections aren’t always so obvious. Sometimes, we just rely on the feeling that we’ll get along with one person better than another.

So vigilant is our unconscious mind in sizing up people that even the most obscure indications can lead to feelings that color and guide our thoughts — and can pack some potent socioeconomic effects.

Research dating back nearly 50 years shows, for example, that teachers view attractive children as smarter. This sways teachers to give those children more attention, which helps them achieve more academic success. And this appears to uphold the initial snap judgment about the child’s intelligence.

When to Go With the Gut

Knowing when to question our thoughts can help us catch our mistakes, but it can also help us understand when to pay attention to what our unconscious minds might be telling us. Suppose the cute guy next door greets you with a smile and tells you how happy he is to see you, but something doesn’t feel quite right. A quick glance at the smile can help to gauge his sincerity: Is he smiling with just his mouth or with his eyes, too? When someone is sincerely happy, the corners of their eyes wrinkle involuntarily — a muscle movement that isn’t easily faked. Without those wrinkles, his smile might just be a polite one, not an excited one. You don’t need to be an expert in nonverbal behavior to make good decisions: Your gut feelings already know what to do. Like any feeling, though, it’s just a sense, and it’s up to us to know when to listen (“Ouch! Take my hand off of that hot stove”) and when to ignore (“Ouch! That flu shot needle hurts but I shouldn’t move my arm until it’s over”).

A peek at the gears and wheels of our intuition about people can help us to make smart decisions. Do I pick a longer line at the grocery store because the cashier working the short line looks chatty and might take longer with each customer? Is it racist for me to hire a White person who went to high school with my brother over an equally qualified Black applicant who went to the private school across town? Knowing ourselves is the starting point to a lot of things, and knowing the workings of our minds can help us make decisions — both for ourselves and for the collective group — that best fit our goals.

Whether we think it’s right or not, even our forewarning mothers can’t help but judge books by their covers. So as we stroll along through the library of life, looking at all the faces on the shelves and in the stacks, it’s important to be aware of where our habits of thought may lead us: to accuracy or to error. 

Perhaps this is why blind hiring should be instituted more in the workplace. Often times humans are too prejudiced by what’s spelled out on paper. I’d be interested in learning how technology will shape the future of more fair hiring practices.

Nicholas Rule is an assistant professor in the department of psychology at the University of Toronto, Canada, where he is also the Canada Research Chair in Social Perception and Cognition. His work principally focuses on person perception and social categorization from minimal cues and thin slices of behavior. In 2013, he received the early career award from the International Social Cognition Network (ISCON).