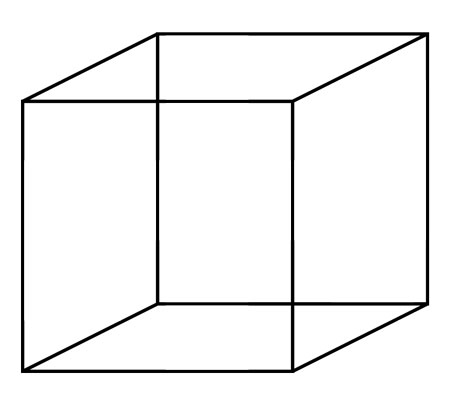 Take a gander at this cube. It will probably look weird because your visual system can’t decide how to perceive it. This persistent ambiguity is called visual rivalry, and in the case of the Necker Cube, it results from spatial conflict, or when two objects strike the same place in our retina.

Most scientists think visual rivalry requires spatial conflict, but the authors of a recent Psychological Science study have shown that this assumption is not necessarily true.

Using non-retinal reference frames, which are objects (e.g., mountains in the background) that make the world appear stable even when our eyes are moving, the study authors created a scenario in which visual rivalry could occur without spatial conflict. They showed participants different arrangements of four dots placed on three larger white discs (the reference frames) that switched back and forth. Depending on the scenario, the dots moved either with the discs or in opposition to the discs. After viewing this “motion quartet,” participants were asked to indicate whether the dots had moved horizontally or vertically.

The researchers found that when there was no spatial conflict between the dots (i.e., the dots were not positioned to hit the same position on the retina), the moving discs made it difficult to determine how the dots were moving. With the identification of this new mechanism, the study authors believe that further progress can be made in determining the specific parts of the visual system  that contribute to resolving visual conflicts.