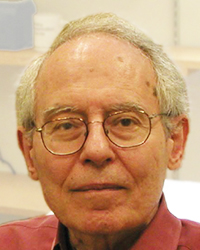 APS Charter Member and Fellow Nathan Kogan died on April 28, 2013, at the age of 86. Nat was professor emeritus of psychology at the New School for Social Research and visiting scholar at Educational Testing Service (ETS).

I met Nat in 1960 when I arrived at ETS. We worked together there, before his long stint at the New School began in 1969; at the New School (I was an adjunct professor there); and again at ETS after he returned in 2006 as an advisor on its research. Although we collaborated on only one study, back in the 70s, recently Nat and I coauthored an account of the history of research on cognitive, personality, and social psychology at ETS.

After completing his undergraduate work at Lehigh University in 1948, Nat started his graduate work at Harvard University in animal learning, but quickly had an epiphany and shifted to cognition, receiving his PhD in 1954. Cognitive styles were a life-long focus of Nat’s research, but he also made major and lasting contributions in his work on risk taking (the risky-shift effect) and creativity (the convergent-divergent thinking distinction), much of it with his longtime collaborator, Michael Wallach. Nat also did important research in other areas, including aesthetics and gerontology. The two bookends to his career are curiously fitting. At the beginning, Nat studied attitudes about old people, and at the end, he was investigating attitudes about extending the life span through biologically based interventions.

Nat was the “compleat” academic. He not only subscribed to a great number and wide variety of journals — I counted three dozen journals in his office — but he also read them. Nat was incredibly well informed about the latest developments all across psychology, and I was always in awe of his erudition. Nat loved to travel and was a constant presence at national and international conferences, as well as a visiting scholar or visiting lecturer at universities around the world.

And he was a helpful and patient advisor to scores of graduate students at the New School. This same helpfulness and patience were on display during his several tours as the department chair, a difficult and thankless job even in the best of circumstances.

Nat was a good friend and a good colleague for over half a century. I am privileged to have known him, and I and many others — friends, colleagues, and former students — will miss him.

Nathan Kogan’s contribution to creativity research is legendary. Indeed, he was a leader who helped establish the field itself. With Michael Wallach, Nat operationalized many of J. P. Guilford’s ideas about divergent thinking and developed many of the most popular creativity tasks used to this day. He also conducted ground-breaking research on how creativity is related to other constructs, such as intelligence and personality; this work remains some of the most cited scholarship in the field of creativity.

Nat remained very active until the end, continuing to go to conferences and review for creativity journals. I solicited a commentary from him on a piece in the journal Psychology of Aesthetics, Creativity, and the Arts on divergent thinking, and it was the best one in the issue. Nat was twice elected president of the Society for the Psychology of Aesthetics, Creativity, and the Arts (Division 10 of the American Psychological Association), 10 years apart, and received the Society’s Farnsworth award for service to the organization.

Personally, Nat was a friend and good person. He was a kind and humble man who was a mentor and inspiration to several generations of researchers. When he came to the Society’s social hour at his last APA convention, I realized that, without name tags, most of the younger folks did not know who he was. I introduced him to some of the young rising stars in the Society, and they peppered him with questions that he happily answered. Later, many of them came up to me and just said, “Wow!”

In losing Nathan Kogan, we have lost one of the early pioneers of creativity research, a tremendously gifted scholar whose brilliant career spanned more than 6 decades. He was someone I admired greatly and hope to emulate.

When I first came to the New School I didn’t know any of the staff personally. I knew of Nat because of his academic reputation but hadn’t met him face to face. When I was assigned an office, it turned out that it was next door to Nat’s. I hadn’t been in my office for more than a few minutes before he came in and introduced himself. I was struck by the fact that this very well-known but self-effacing fellow took the time to introduce himself and ask if there was anything that he could do to help me get situated in the department. That was the beginning of a long academic and personal relationship that I’ll always remember and treasure. I soon found that this helpful mentoring extended to his graduate students, and as a result Nat probably turned out more PhDs than anyone else in the department. I like to think that I shared in some of Nat’s success as a mentor because I served on many of his students’ dissertation committees. I was always impressed by Nat’s demanding yet very helpful approach to the task of leading students through the hurdles to attaining a PhD. I’ll sorely miss Nat as a colleague and, most importantly, as a friend.

I met Nat Kogan many years ago, just after receiving my PhD. When crossing the continent from Palo Alto to my first job at Harvard, I stopped by the APA meetings in Chicago, and my friend Perry London brought me, Nat, and Bob Rosenthal together for dinner. Nat had been a graduate student at Harvard, and Bob was a professor there. They gave me a lovely introduction to the Department of Social Relations.

After that Nat and I spent time together at many APA meetings, sitting and talking in lobbies, watching people go by.  Nat was separated from his first wife and for some period of time when we used to meet he was lonely. But Nat was a handsome man, and a lovely, graceful person, and after a while met his second wife, Katherine Stoessel. Our friendship then became a couples’ relationship. While work was very important for Nat, he was devoted to his family. We were close friends during that marriage, and I know that its ending was a great loss to him.

Nat was a committed and outstanding scholar. While our areas of work were different, he was always interested in talking about what each of us was reading, writing about, doing research on. When I met Nat, the important work on risky shift was behind him. For a long time, he was very engaged with his work on metaphors. But over the years, we talked more about intimate things, such as relationships and marriage. Nat was was soft spoken, gentle. He did not put himself forward, and when a number of people were together, he was comfortable mainly sitting back and listening. From his demeanor, one would not have guessed what an accomplished and successful scholar he was.

Nor would anyone have guessed that he was very much a man of the world. He liked to go to conferences, and he knew a lot about places around the world. He also knew about restaurants. I learned from him what was required for a restaurant to receive a star for the Michelin guide (consistency in excellence—every appetizer, main dish, dessert, had to be excellent). He took me once, during an International Psychology conference in Paris, to the most enjoyable French restaurant I have been in.

Nat was a gentle, thoughtful, lovely person. Being his friend was a deeply satisfying experience.

Nat’s pre-eminent characteristic, I feel, was his steadfastness. You could count on him to do what he said he would do on the schedule that had been set, making life a pleasure for his research collaborators! He was steadfast in his loyalties to friends as well, looking them up and keeping in touch despite separations of time and space.

In his interactions he showed a dry, modest sense of humor reflecting broad interests in the human condition.

Seeing him again after an interval was always a rare pleasure. He had a way about him that made it possible to pick up the threads of a conversation as if no time had gone by. The result was a warmth that remained undiminished despite the passage of years.

What delightful memories were stirred up in me by the tributes to my friend, Nat Kogan. In my frequent excursions to the U.S.A. from my native Australia up to my ‘retirement’ in about 1990 (academics have no real retirement date) all roads seem to have led to Nat at Harvard in the 1950s, including Jerry Bruner’s amazing Cognition Colloquium (Michael Wallach was also a member), at Educational Testing Service in the 1960s, and afterwards, here there and everywhere our paths met. We even were together when he came on leave to Melbourne. I particularly treasure our discussions about creativity and the metaphor Nat was well described by the contributors to the memoirs in the Observer as a brilliant, committed, polymath, all-round psychologist and a warm, modest, helpful lovable human being.

Nat was my professor, served on my dissertation committee, and continued to be a colleague after my graduation and his retirement. I distinctly recall his classes and seminars in cognitive approaches to personality, which included topics such as creativity and cognitive styles. He was a leader in both areas. In fact, he was often referred to by students as Mr. Cognitive Styles. He was an exemplary thinker, productive scholar, and genuinely nice guy. When I published my book on Gifted IQ: Developmental Aspects, Nat was the first to send me a note complimenting me for my landmark contribution to this field. We would meet regularly at APA, even subsequent to his retirement. He was a contributor, scholar, and great role to the end. He will be greatly missed by many.

I met Nat when I moved to the northeast for graduate school in 2008. I worked with him over the next five years, studying coorelates of attitudes towards life extension. Patient and thoughtful, Nat was both a mentor and a friend. I especially enjoyed meeting with him at his office at the New School or the handful of times we met in Princeton for a bite to eat and friendly conversation. I last saw Nat at the 2012 GSA conference where we shared authorship on a poster. Nat was truely an inspirational person for not only his intellect but also his modesty. I new him mostly for his work in the field of aging, but the breadth of content he has had an impact on is astonishing–and only realized when you talk with someone other than Nat.