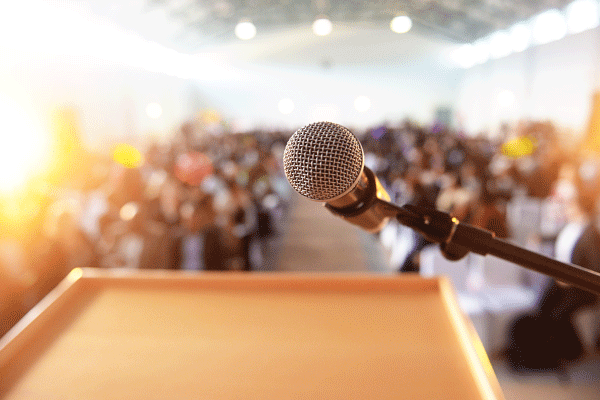 From time to time, people who have a passion for science communication find themselves called upon to stand in front of a large crowd and talk about their research and its impact on society. For many science communicators, public speaking is an effective way to share information with a wide range of science enthusiasts. But for some, the prospect of being center stage is a fate best avoided.

During his stand-up days, actor-comedian Jerry Seinfeld observed that the two things people fear most in life are speaking in public and death… and death was number two. “That means if you’re at a funeral, you would rather be in the casket than giving the eulogy,” he quipped. Seinfeld’s clever observation was, in part, based on fact. In 2014, a Chapman University Survey placed public speaking at the top of its list of American fears. More recently, the number-one spot has gone to “corrupt government officials,” reflecting a change in the times.

Public speaking, however, is still a stumbling block for many aspiring science communicators. Though comfortable writing engaging articles and books or even recording podcasts or videos, some otherwise outspoken people prefer to avoid the limelight of public speaking. That’s unfortunate, because if the voice of science is missing from public events, that vacuum will quickly be filled by less scientific perspectives.

There is no compelling reason for your audience to be in attendance other than their innate interest in the topic. No one is graded at the end of your talk, and the content you’re presenting is unlikely to have any bearing on anyone’s career or research. The burden is on you to capture and maintain the attention of your audience.

To be more effective public speakers, science communicators should use three seemingly intuitive tactics. First, understand your audience. Second, understand what your audience wants. Third, be a good speaker. The first two factors require some insights. The final one requires practice and awareness.

Understanding your audience starts with understanding there is no such thing as the general public. Every public presentation can draw together students, families, and science enthusiasts as well as potential naysayers and protestors. Such audiences can be easily distracted, and distracting. Tailoring your content and delivery to your audience is important. (For additional details on this, read my May/June column, in which I discuss the importance of avoiding scientific jargon.)

Understanding what an audience wants is surprisingly straightforward: They want to be entertained. If they are not entertained, it won’t matter what you say—no one will care, and no one will remember. Being entertaining does not mean being an “entertainer.” In the words of another actor-comedian, Rip Taylor, “This is it, folks. I don’t dance.” Know what you are good at and use it to your best advantage. Present engaging content and convey your passion for your research. If you can express that in an approachable way, then you will be entertaining.

Finally, the characteristics of being a good speaker are harder to explain. A well-written talk can leave an audience flat, while a poorly constructed talk can draw in listeners if it is presented with zeal and focus. If you want someone to emulate, you can’t do any better than children’s television pioneer Fred Rogers.

Mr. Rogers, as he was known to generations of American youngsters, effortlessly adopted virtually all the best practices in public speaking. Most importantly, he spoke directly to his audience, not to his peers. If you are an expert in something your audience is not, consider how they perceive things and the language that they use.

Mr. Rogers also spoke as if he were talking to an individual, not to a group. In the words of leadership strategist Chet Wade in his article “Ten Lessons From Mr. Rogers on How to Make Yourself Heard”: “It does not matter how many people are sitting in the audience or watching remotely. They take in the message individually. Speak to each one of them, not the group, and you will be more successful.”

Frequently untapped opportunities for science outreach, especially in psychological science, are science fiction and fantasy conventions. From small fan-organized conferences to mega-cons that draw nearly 100,000 participants each year, fan-based conventions frequently attract the science-interested lay public. Remarkably, many attendees are well-versed in a variety of fundamental science topics and routinely ask insightful questions. This past July, I was invited to be a speaker at Shore Leave, an online convention typically held live in Baltimore. My talk (bit.ly/3Axndzs) focused on the latest discoveries in psychological science, and though conducted via Zoom, with all its limitations, interest was strong, and participation was vibrant.