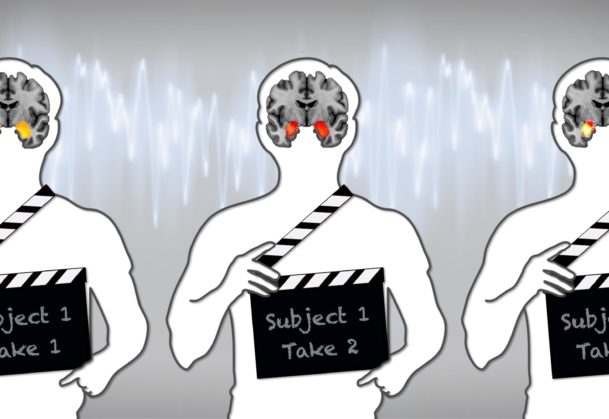 As many a weekend warrior or professional athlete will attest, even a seemingly minor twist of the ankle or bump on the knee can send someone to the hospital for an MRI. In spite of their reputations for being noisy and at times claustrophobic, MRIs are medical marvels with an unparalleled ability to peer safely inside the human body to detect otherwise hidden maladies, like soft-tissue injuries or newly formed tumors.

Though the basic technology of MRI is more than a half-century old, these imaging tools continue to improve in sensitivity and resolution, breaking new ground in both fundamental research and therapeutic interventions.

Perhaps one of the MRI’s most intriguing applications is in mapping activity inside the human brain, in near real-time. As this application, known as functional MRI (fMRI), has grown over the past two decades, a number of studies have hinted at its potential to predict certain human behaviors and neurological responses to specific situations.

“If a measure gives a different value every time it is administered, it can hardly be used to make predictions about a person.”

These tantalizing studies suggest that fMRI may eventually lead to innovative therapeutic interventions in areas ranging from mitigating depression, anxiety, and dementia to curtailing antisocial or even criminal behaviors.

But even as this technology has opened new windows into psychological science, age-old questions remain about the reliability of any predictive test when it comes to human health. Specifically, are the basic assumptions about fMRI measures of brain activity on solid, rigorous, and science-based ground?

A 2013 special section published in Perspectives on Psychological Science explored how fMRI results have changed the way we think about human psychology and the brain. Some studies referenced in that issue argued against the idea that the human brain has a “fixed neural architecture,” suggesting that different brains would present different fMRI results in response to similar stimuli. Certain studies also examined the way fMRI contributes to cognitive theory, while still other studies highlighted fMRI’s usefulness in specific applications, like direct measures of pain experience.

More recently, a team of researchers from Duke University’s Laboratory of NeuroGenetics led by APS Fellow Ahmad Hariri shed new light on the predictive ability of fMRI. They used a combined meta-analysis of prior research and novel analyses of test-retest data to assess the reliability of many commonly used fMRI measures of brain activity.

Their conclusions, published in Psychological Science, offer a cautionary tone and advocate against reading too much into claims of fMRI’s predictive abilities.

To understand what the researchers set out to study, it’s best to start with a more thorough explanation of how MRI works and how it can be used to measure brain function.

In 1972, the Nobel Prize-winning technology of MRI was first applied to studying the soft tissues inside the human body. Though MRIs were a latecomer to noninvasive medical imaging, compared to CAT scans and other X-ray technologies, they kicked off a revolution in healthcare.

The technique itself is an elegant blend of physics, engineering, information processing, and medicine.

At its most basic level, MRI works by coaxing positively charged protons, the nuclei of hydrogen atoms found in water molecules, to align the orientations of their “spin” with powerful magnetic fields.

Powerful radio pulses then briefly flip the orientations of some of the protons with respect to the magnetic fields. When the protons “relax,” or return to their original orientation, they emit a tiny bit of their pent-up energy in the form of radio waves, which can be detected and their point of origin localized, thanks to sensitive radio detectors and sophisticated computer programming. Depending on the differences in water concentration and how quickly the protons re-emit their energy, it’s possible to determine the type of tissue they came from—tendons, organs, cartilage, and even the white and grey matter of the brain.

Nearly three decades after MRI was first used in medicine, researchers began exploring how this imaging technique could be used to study not just the structure of the brain, but how the brain actually functioned in response to stimuli, hence the term fMRI.

This innovative application is possible because more active groups of neurons in the brain recruit more blood flow and use more oxygen, derived from oxygen-bearing hemoglobin, than their surrounding neurons and tissues. Since hemoglobin has different magnetic properties, depending on whether it is in its oxygenated or deoxygenated state, MRI scanners can show which regions of the brain are more active and responding more strongly to specific situations or stimuli.

When researchers study the brain using fMRI while an individual is exposed to a “condition of interest,” such as viewing objects or completing a math problem, they are able to map brain activity associated with specific cognitive functions. This so-called task-fMRI has been used to study how the “typical” human brain functions by averaging changes in brain activation across members of a group.

For example, there is a noticeable increase in activity in the brain’s amygdala when people view images of faces showing strong or hostile emotions in comparison with neutral faces. The consistency of the results across cohorts led some researchers, including Hariri, to consider the possibility that task-fMRI may reveal a connection between brain activity and risks for disorders like depression and anxiety. If the typical healthy brain responds to task stimuli one way, then perhaps a brain that responds to the same task more vigorously than is typical, or more lethargically, might signal risk for mental disorder.

The thinking was that, since the amygdala is more active when people feel threatened, it should be possible to correlate clinical phenomena like anxiety and depression to differences in the magnitude of amygdala activation between people in the lab.

In this way, task-fMRI could be transformed from a tool for understanding how the average brain works to a tool for studying how brains differ between people. This information could one day inform who may be at greater risk for anxiety and depression, or who might respond most favorably to certain antianxiety medications and antidepressants.

At least, that was the theory. The new research, however, suggests that this leap from study to therapy is still a long way off.

For their research, Hariri and his colleagues used a combination of a meta-analysis of prior research and new analyses of test/retest data to assess the reliability of many commonly used task-fMRI measures of brain activity.

Their results found that, on average, 56 prior test-retest studies did not produce the same readings for each individual from the first to the second test. This was true even when the tests were separated by only a short period of time. The researchers found the same lack of reliability in two new test-retest studies using data from state-of-the-art MRI machines.

“If a measure gives a different value every time it is administered, it can hardly be used to make predictions about a person,” observed Hariri.

The results strongly indicate that, at least currently, task-fMRI cannot accurately predict outcomes, such as whether or not a person may develop depression, or whether they will respond favorably to certain antidepressants.

“This is important,” noted Hariri, “because more and more such studies are being reported, often accompanied by sensationalistic headlines. Also, many large-scale studies, including the National Institutes of Health Adolescent Brain Cognitive Development (ABCD) and the UK Biobank studies, have adopted unreliable task-fMRI measures in an effort to better understand differences in brain activity that can help predict the future health of individuals.”

The Duke team’s findings, which are derived from the largest and most comprehensive set of analyses to date, suggest not only that psychological scientists need to exercise caution in evaluating the broad applicability of task-fMRI studies, but that researchers also need to step back and develop a more rigorous foundation for advancing task-fMRI measures of any brain-behavior correlations.

“We should further note that our findings do not question the validity of task-fMRI measures to reveal important aspects of how the average human brain functions. In fact, task-fMRI measures do a great job at measuring average brain function,” Hariri explained. “Rather, our findings more specifically question the application of these same measures to reveal how the brains of different people function differently.”

Further research, particularly in the age of individualized medicine and precision neuroscience, may lead to clinically important results, the researchers note, so long as we accept current limitations while striving for more meaningful outcomes.