One of the core concepts of psychology is consciousness. Yet, because consciousness has generally been considered intangible, it has been thought that science will never be able to truly characterize it. But as the four researchers at the Consciousness theme program at the APS 23rd Annual Convention demonstrated, advances in the field are helping scientists tease apart the mysteries of consciousness and turn them into solvable scientific problems. 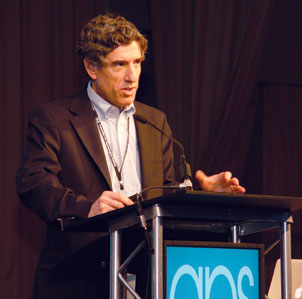 Richard J. Davidson, a neuroscientist from the University of Wisconsin at Madison, studies how the process of meditation changes the brain. He spoke about how this line of research was influenced by meeting the Dalai Lama in 1992. At the time, Davidson was studying phenomena surrounding negative emotions. Davidson said that the Dalai challenged him by saying, “You guys are using the tools of modern neuroscience to study qualities like fear and disgust and depression. Why can’t you use those same tools to study qualities like kindness and compassion?”

So Davidson began to investigate the brain circuits that are recruited by acts of compassion and other positive behavior. He invited several practitioners of different meditation traditions to his lab so that he and his team could study how the practitioners’ brains were affected by the years they spent training their minds. They compared times in which the practitioners were actively “filling” their minds with love and compassion to neutral resting states. Davidson and his team observed a distinct change when they measured the electrical activity of the brain using EEG. More specifically, they saw changes in gamma oscillations, as well as differences between the practitioners and control subjects in the amplitude and frequency of the oscillations. A similar difference between practitioners and control subjects was also found using fMRI.

But these effects on the brain are not just limited to experts. When novices were taught to meditate and then practiced for two weeks, they were found to be more altruistic in a money game than people who were taught a different technique.

“These findings suggest that just after a short period of training, participants were showing changes in the brain and in behavior compared to an active comparison group that received a structurally comparable type of training,” explained Davidson.

Other studies in Davidson’s lab showed that meditation can benefit attention by reducing attentional blink and by reducing the variability in response times when conducting certain tasks. What’s more, Davidson and his team also observed beneficial effects in the body. For example, people who practiced meditation for two months had a larger antibody response to an influenza vaccine, suggesting that meditation is beneficial to the immune system.

The most important conclusions from their work so far, said Davidson, are that compassion and meditation can be learned and that no expertise is required to benefit from practicing them. “Emotion regulation, compassion, kindness, mindfulness, and other related characteristics are best viewed as skills that can be developed,” he said. 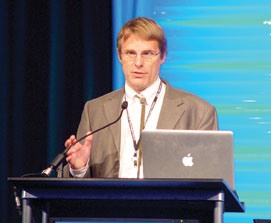 Following Davidson’s presentation, Giulio Tononi, also from the University of Wisconsin at Madison, moved the focus of the program toward the theoretical underpinnings of consciousness.

According to Tononi, the empirical studies of consciousness are converging, and scientists have gathered a lot of evidence about the brain activity that correlates with consciousness. But this is not enough, Tononi said.

“Localization is not an explanation,” he says. “You can’t just get the neural correlates of consciousness. You also need a theoretical approach to explain what consciousness is.”

Tononi described what he calls the “integrated information theory.” In this account, a single experience is an entity comprised of integrated information that cannot be separated into individual parts. And each experience will rule out all other experiences that a person has encountered before. He used the example of waking up in a dark and silent hotel room, as he said he did that morning. Upon wakening, his mind instantly distinguished that he was in a dark hotel room, thereby ruling out other experiences that he had had previously. As he became conscious of this hotel room, he said, he knew it was in Washington D.C. and that he was staying in the hotel to attend the APS Convention. This information, while not directly evident in the hotel itself, was connected to his waking experience because the information that is woven together in each experience cannot be separated.

Based on this definition of an experience, Tononi proposed that the system in the human mind that manages consciousness must be a single entity that includes a vast repertoire of states. In other words, the system must be like an MP3 player that can call up any song in existence — only instead of songs, the system accounts for every experience that a person has ever had.

In addition to sharing the details of integrated information theory, Tononi presented some data to demonstrate how this theory can account for previous experimental observations. For example, consciousness researchers have wondered why the cerebellum, a portion of the brain that is crucial for learning and for controlling various senses, appears to have no role in consciousness. Using his calculations, Tononi proposes that the reason the cerebellum is playing second fiddle to other brain regions,  like the cerebral cortex, is that the cortex is more highly specialized for managing the integration of information, which is necessary for maintaining consciousness. Tononi said that his theory can also account for minds that are at different stages of development. Infants, he said, have had fewer experiences, so the quantity of their consciousness will be different from that of adults, even older adults who are beginning to experience a decline in the integration of information. 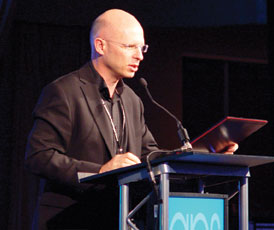 In contrast to the other speakers, Stanislas Dehaene from Collège de France INSERM-CEA explores consciousness by exploring the borders of unconsciousness.

Dehaene and his team have conducted studies to see how information may move from unconscious to conscious awareness. In one experiment, they subtly changed the spelling of a word to see whether showing the word as a subliminal or conscious prime would yield different levels of brain activity. The example Dehaene used was the word “garage,” which they changed to “garaje” because the pronunciation of the two words is similar in the French language (as a control they used the pseudoword “garape”). What they found was that when the words were presented as conscious primes, a broader network in the brain was more activated than when the word was presented as a subliminal prime.

Dehaene explained that this contrast between unconscious and conscious processing supports a theory that he has developed with his mentor, Jean-Pierre Changuex, called the “global neuronal workspace hypothesis.” According to this view, consciousness is based on the availability of information.

“What we call being conscious is when information stays available in working memory, in our workspace system,” said Dehaene. “During conscious access, multiple high-level areas accumulate sensory evidence, they exchange information bidirectionally, and we claim that they converge on a single interpretation of the stimulus. And when they all agree, and the information can be circulated and maintained, we claim that the subject is conscious.”

Dehaene supported his theory with  data from electrical recordings taken from the scalp (more specifically, P3b recordings). These recordings show that activity prompted by unconscious and conscious processing is similar until a certain timepoint at which the network for conscious processing is “ignited” and extends to different parts of the cortex, while any activity related to the subliminal prime remains in the occipital and temporal areas of the brain. 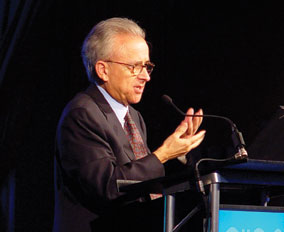 The final speaker, Antonio Damasio from the University of Southern California, discussed the concept of the self in consciousness. According to Damasio, there are three parts of self: the protoself, the core self, and the autobiographical self. The protoself mainly consists of spontaneous “primordial” feelings. The core self arises when a person interacts with an object outside him- or herself and begins to form a mental narrative about that object that incorporates feelings. And then there is the autobiographical self, in which humans maintain their personal narrative about themselves.

The key to these parts of self, Damasio said, is the brain stem. “Without the brain stem, and without particular structures in the brain stem, you cannot have consciousness,” he said. “The brain and the body are interconnected permanently, and they are inextricable. So there is no way that you can stop bombarding the brain stem [with signals] from the body. As long as you are alive, [the signals are] always there.”

He supported his claims with data from lesion studies that both demonstrated the importance of the brain stem and showed that other brain areas are not as important as researchers previously thought they were. One such area is the insula. Damasio presented data on a patient who had a void in his insular regions: “That patient,” he said, “is as conscious as anybody in this room.”

Between advanced neuroimaging and recent theoretical developments, neuroscientists and psychologists now have the tools to study consciousness in an objective manner. As the speakers in the program made clear, they are using these tools to tackle the experimental challenge of studying consciousness head on, and this is a very exciting time to be in the field.