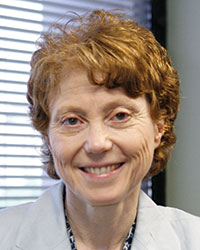 Temple University psychologist Nora Newcombe has received a 2014 William James lifetime achievement award from APS, in honor of her role in advancing the field of cognitive science. Newcombe will deliver her award address, “Resolving the Nativist-Empiricist Debate: A Neoconstructivist Approach to Cognitive Development,” at the 26th APS Annual Convention, to be held May 22-25, 2014, in San Francisco.

Newcombe has made vast contributions to the understanding of spatial cognition — the mental visualization of two- and three-dimensional objects. Making Space, a 2000 book she co-authored with APS William James Fellow Janellen Huttenlocher, fused classic theories of both learned and innate spatial reasoning to create a new conceptualization of cognitive development.

Newcombe has also challenged gender stereotypes about spatial reasoning ability. While men are more skilled at mental rotation, horizontality and verticality tasks, and mechanical reasoning, discrepancies between the sexes in navigation abilities cannot be directly attributed to these spatial ability differences.

She has led the Spatial Intelligence and Learning Center (SILC), which is funded by the National Science Foundation and explores learning in an interdisciplinary framework. She has thus brought spatial cognition to the forefront of society’s understanding of human intellect.

Newcombe has also extensively studied memory and memory development, integrating research from adult cognitive psychology and neuroscience to the exploration of implicit and explicit memory distinctions and differences between semantic and episodic memory.