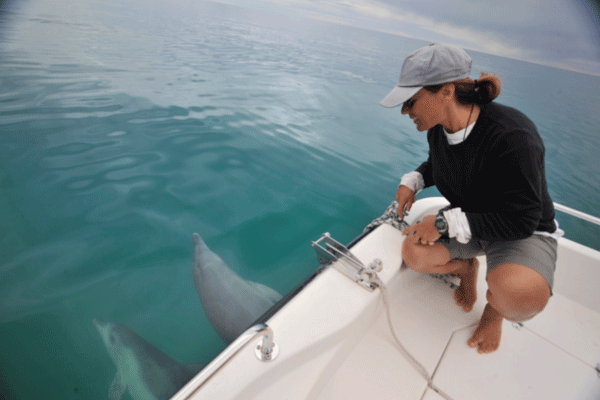 Janet Mann, a professor of psychology and biology at Georgetown University, dives deep into the social lives of these clever marine mammals.

You’ve studied dolphins’ behavior and development for more than 30 years now. What first drew you to studying this species?

I started out interested in animal behavior broadly but focused on primates (including humans) to start. My perspective was always grounded in ecology and evolution. During my undergraduate years at Brown University, I spent nearly a year conducting savanna baboon research in Kenya with Jeanne Altmann. Although my PhD research at the University of Michigan was on human infants, when my advisor Barbara Smuts asked me to help her start a research project on bottlenose dolphins in Australia in 1988, I jumped at the chance.

What has been your most unexpected or surprising discovery involving oceanic dolphins?

One discovery that surprised me was vertical transmission of tool use. Shark Bay (Western Australia) dolphins have become famous for using basket-shaped marine sponges as tools. The sponge protects the rostrum (beak) while the dolphin forages in the substrate for fish. In 1989, I was conducting a focal follow on the first “sponger” that had been discovered. Her 2-year-old daughter Demi was foraging at some distance, and we noticed that she had a small sponge on her rostrum. Now, 32 years later, Demi is still sponging, and her daughters and grandoffspring are spongers too! This strong vertical transmission of tool use in a minority of the population (about 4%) is fascinating. They spend more time using their tools than any other non-human animal—and I would argue this behavior is quite clever.

What can this understanding teach us about the human mind?

Human and dolphin societies have features characteristic of high relational and structural social complexity, including extreme fission-fusion dynamics, which means that associations or groups change composition frequently. Theorists suggest that the cognitive challenges of deciding whom to associate with based on the history, context, and individual characteristics, and higher order subgroup membership such as allies, families, and cliques drive elaborate social cognition.

The specific dynamics of human and dolphin societies differ, but there are similar challenges and tensions in forming, maintaining, and dissolving social bonds at multiple levels.

What are you researching now?

With a 36-year long-term and longitudinal dataset, there is much to be mined and discovered.

With Professor Shweta Bansal, we have been modeling disease dynamics in relation to contact behavior in the Shark Bay population and our new study in the Potomac River and Chesapeake Bay (pcdolphinproject.org). The latter population suffered a serious morbillivirus outbreak in 2013-2015, which killed thousands of dolphins along the eastern seaboard of the U.S. We have a range of questions about why dolphins are coming into the Potomac River. In the 1800s, there are some reports of bottlenose dolphins as far inland as Washington, D.C., and Alexandria, Va.

My graduate student Taylor Evans is examining social and ecological phenotypes among individuals in the Shark Bay population. Some of these phenotypes show remarkable stability for over 30 years. We hope to understand how and why individual phenotypes are so well differentiated, how they change during development, and what impacts phenotypes have on network structure and individual fitness. These are fundamental questions on what drives individual differences.

Similarly, my current NSF grant focuses on non-genetic inheritance from the mother and how that influences offspring phenotype. To do this, one needs to account for genetic variation. With Dr. Celine Frere at The University of the Sunshine Coast, we are examining these genotype-phenotype interactions.

Do you have other favorite findings about dolphins to share?

I am always excited about what is coming next, so stay tuned.