Observer > 2017 > September > Living in Harmony: The Dynamics of Social Coordination

From two people dancing a waltz to an entire country celebrating a national holiday, social coordination frames our interactions at every level of social engagement.
Scientists who study these phenomena want to understand how we use language in addition to affective, social, and environmental cues to organize and reconcile our intentions and actions. Five psychological scientists at the forefront of this field convened at the 2017 International Convention of Psychological Science in Vienna to discuss social coordination from a variety of methodological and theoretical viewpoints. 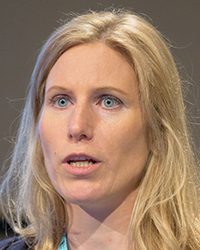 People use sensorimotor communication such as exaggerated hand flourishes or arm movements to coordinate with other people, says Natalie Sebanz.

As the leader of the Social Mind and Body Group at Central European University in Hungary, Natalie Sebanz knows that the often effortless-seeming nature of joint actions belies the precise coordination required to pull them off successfully.

We take advantage of multiple mechanisms to enable this coordination, including using our own motor system to predict the actions of another person, Sebanz said. In an EEG study examining the joint action of clinking glasses together, as in a toast, she found that subjects’ brain activity when clinking a glass with another person was more similar to their activity when clinking two glasses together themselves than when raising a single glass in the air. Coordinating with someone else looks a lot like coordinating with ourselves.

“When you are in a joint-action situation, on one level you are literally planning someone else’s action as if it was your own,” Sebanz explained.

Sensorimotor communication is another way of achieving coordination with another person, as it can be a way of making actions “speak,” she said. Punctuating a gesture with a superfluous flourish or increasing the arc of an arm movement when pointing can convey instructive or affective information beyond the motion itself.

In situations where we are trying to coordinate with someone we cannot see, we can’t rely on sensorimotor mechanisms, so we compensate by acting as predictably as possible, Sebanz said. In a higher-order framework, this could mean relying on precedent or known habits, but in the context of fine-grained motor coordination, it consists of reducing the temporal variability. This can mean taking the quickest, most direct path or otherwise cutting down on variables that the other person would not be able to anticipate. 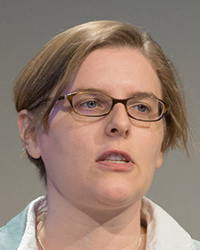 Antonia Hamilton has found that direct gaze between a performer and an imitator in a puzzle task increases the accuracy of the follower’s mimicry.

From a young age, humans (and a few other species) spontaneously imitate behaviors they observe others performing. Antonia Hamilton, Senior Lecturer at the Institute of Cognitive Neuroscience at University College London, investigates imitation with a particular interest in how direct gaze — a potent social stimulus — can affect how we perform this most basic act of social coordination.

She has found that direct eye contact makes imitators respond faster than when the person they are imitating is looking away, an effect regulated by the medial prefrontal cortex (mPFC) — a brain region associated with executive control.  Her Social Top-Down Response Modulation model posits that the mPFC exerts top-down control via the visual-motor stream to regulate selective imitation response.

Hamilton hypothesizes that gaze induces an audience effect in the imitator, and she has developed an augmented reality system in order to test this theory in the real world.

In pairs comprised of a leader and a follower tasked with completing a puzzle, the leader viewed visual instructions on how to complete the puzzle that included variation in the height of the arc of the instructor’s arm movement. The followers, who did not see the instructions and had to learn from watching the leaders perform the task, tended to take a similar trajectory as that of the leader, performing a highly faithful imitation. Their trajectory correlated even more strongly with the leader when the leader’s eyes were open as the follower completed the task versus when they were closed. The simple act of being watched by the leader made the follower’s imitations more accurate.

“This is an entirely implicit communication behavior, but it’s showing that adults will spontaneously imitate another person in order to communicate in this kind of a live interaction context,” Hamilton said. 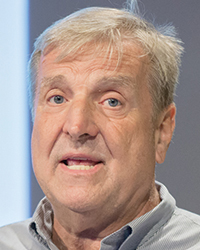 Andrzej Nowak has developed mathematical models of synchronization among individuals that account for the level of complexity and the strength of the connection among people in a society.

Coordination on the basis of time, known as synchronization, occurs at every level of human life, from the firing of neurons to the formation of governments. Some level of synchronization is necessary for societies to perform their functions and satisfy the needs of individuals.

Psychological scientist Andrzej Nowak, working at Florida Atlantic University, also is the Director of the Center for Complex Systems at the University of Warsaw. He uses mathematical techniques and theories to help explain social psychological phenomena. He has developed mathematical models of synchronization among individuals within a society that account for the level of complexity and the strength of the connection between agents; these models have shown that strong coupling and simpler dynamics tend to make for better synchronization. Despite the complex and seemingly unpredictable nature of larger systems such as societies, synchronization can be simulated in a dynamical systems context via a network of chaotic oscillators. Nowak is able to measure the entropy, or disorder, of the simulated system, which acts as an indicator of synchronization: A high level of entropy suggests low synchronization, and vice versa.

By varying the level of control exerted on the network (analogous to the degree of control imposed on a society by governing structures) and the number of connections across the network (representing the relative strength of civil society), Nowak can observe how patterns of synchronization, change over time as governmental entities evolve, such as when an autocratic leader is removed from power.

From these simulations, Nowak, APS Fellows Michele Gelfand and Arie Kruglanski, and Wojciech Borkowski have used a Minerva-funded grant from the US Department of Defense to glean insights into autocratic recidivism, explaining factors that can influence whether and how a society can transition from an autocratic regime into a democracy, or alternatively, after a brief period of freedom, return to an autocratic rule. Factors affecting the success of democracy include the need for a strong civil society, similar action tendencies among members, and optimal complexity of common actions. 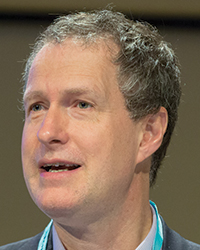 Virtual bargaining — the adoption of an implicit agreement based on what a group would agree to rather than what an individual would do — is essential to team building, Nick Chater explains.

APS Fellow Nick Chater, Professor of Behavioral Science and Head of the Behavioral Science Group at Warwick Business School, investigates a fundamental question of team coordination: How do the beliefs and desires of the many transform into a singular action of the group?

Individualistic perspectives of behavior assert that individuals aim to maximize their own value to the group by trying to predict what other members would do and acting accordingly. However, this individualistic approach ultimately leaves one stuck in a regressive loop, as Person 1 tries to determine what Person 2 would do, and Person 2’s actions in turn rely on what Person 1 would do, Chater explained. Thus, the key question is not “What would the other member(s) do?” but rather “What would we do?”

This is where the theory of virtual bargaining comes in. Adopting an implicit agreement based on what the whole group would agree to if there were open negotiations reconciles methodological individualism with collective agency, allowing for a team to emerge from individuals.

“What virtual bargaining is as a theory is a bridge between an individualistic perspective and the understanding of collective behavior, because actually it does provide an account of how individual preferences, beliefs, and desires can turn into a collective,” Chater explained. 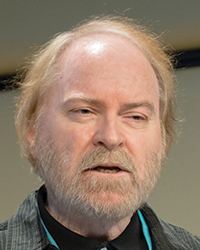 Shaun Gallagher advocates for an embodied and enacted view of social cognition.

Shaun Gallagher, a professor of philosophy at the University of Memphis, believes that corporeal components of interactions such as posture, facial expressions, vocal intonation, and gesture are critical aspects of coordination. Thus, perception depends not only on sensory stimuli but also on the dynamic interactions between one’s mind and one’s body, and between one’s body and the external environment.

Gallagher advocates for an embodied and enacted view of social cognition, a perspective that takes into consideration not only a situation’s constituent elements, including the participants and the environment, but also interactions among those elements as targets of analysis and vital components of cognition itself.

Gallagher discussed the idea of affordance, or the range of all possible actions — to or from the body or theenvironment — and how these possibilities are enabled and constrained by our own bodies and by the environmental context, both physical and cultural. Understanding the field of affordances available to an individual in a specific context and the larger landscape of affordances that defines all the possibilities for a whole culture enables philosophers and psychologists to fine-tune their analyses of interactions and delve into the many factors that promote or prevent coordination, including race, gender, and class.

Observer > 2017 > September > Living in Harmony: The Dynamics of Social Coordination