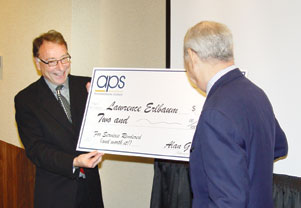 APS Executive Director Alan Kraut handling Larry Erlbaum a much deserved check for his years of service to APS.

Larry Erlbaum is a real-life personal and professional hero. Personal, because of the importance he attaches to the people in his life. Many times I have witnessed the wonderful relationship he has with his lovely wife Sylvia and how proud he is of his daughter’s writing and many accomplishments. I know of his deep and personal friendship with so many of our APS colleagues, and how he reaches out to those in need. I have seen him at the happiest of occasions and at the saddest, and it is always his personal touch that seems to bring just a bit of magic to either.

Professional, because of the enormity of his accomplishments. Over 30 years ago, Larry took a chance, publishing then-lesser-known psychological scientists who couldn’t get the time of day from other publishers. He reached out, publishing the journals of so many of our smaller scholarly societies who otherwise wouldn’t have been able to make it on their own.

Oh, there is one more thing he did along the way. He took a fledgling, not-very-commercial and certainly not-very-established psychological association under his wing. He provided APS advice on publishing (and truth be told on any other cockamamie issue that popped into his head, but that’s another story), and he turned us into the most important association in social, behavioral, and psychological science — bar none. For all that and for so so much more, we all offer Larry our most sincere thanks and this small token of our esteem. We cannot begin to tell you how grateful we are for all you have done for us.

But wait! There is more. …and now the other side of Larry Erlbaum. The darker side.

Sure, Larry did all that, but not for nothing. After all, he’s a businessman, right? So, early on in our relationship, Larry extracted a financial contract from APS in his own tough-minded way. He would be a consultant to APS, but for the exorbitant price of… $1 per year.

Funny, right? Honest, I always thought he was joking, but then came last year.

One of our conversations ended with Larry saying, “You know, Alan. I have been consulting with APS for over twenty years now and each year I am suppose to be getting one dollar. So far, I have gotten exactly nothing!”

“Well,” I said. “In that case, recession or not, I am doubling your salary. From now on, you are going to not be paid $2 a year! Congratulations.”

But of course that was not the end of it. So, although the Board would not authorize any back pay, I am delighted to pay Larry today your 2011 salary of $2. And here is your 1099 for the amount so that you can pay your fair share of taxes next April.