The study of culture has gained a noticeable presence across research, training, and practice in American psychology (American Psychological Association, 2003; Cheung, 2012). As graduate students, we have all become familiar with certain phrases: cultural competency, biculturalism, and human diversity, for example. The growing emphasis on cultural awareness is largely due to the efforts of professional and student organizations, such as APS and the APS Student Caucus, to promote research that captures the complexity of the culturally diverse society in which we live. As a bicultural individual, I am fascinated by research that examines the influence of culture on psychology using empirical research methods. Here, I delineate the need to investigate culture within the context of an integrative theoretical model of culture, psychology, and behavior.

Early on, the discipline of psychology acknowledged the influence of culture on human behavior (Wundt, 1921), but psychological scientists have struggled to adequately measure this concept. Culture is inherently difficult to define due to its multifaceted nature (e.g., dimensions of collectivism and individualism within a group); therefore, researchers often have used demographic variables (ethnicity, race, language, national origin, socioeconomic status, etc.) as proxies for culture, leading to an overreliance on group comparisons. This method of analysis may not fully account for the influence of culture both between and within groups. As someone of mixed ethnicity and generational status (my maternal great-great grandparents emigrated from Sicily, making me a third-generation American, and my father emigrated from Cambodia, making me also a first-generation American), I question the concept of distinct “cultural” groups. For me, sociodemographic variables do not fully capture the construct of culture.

Fortunately, experts in cultural research have made great strides in conceptualizing culture. In 1993, Hector Betancourt and Steven Regeser López (now at the University of Southern California) highlighted how sociodemographic variables contribute to cultural factors but do not sufficiently measure culture. Instead, they pointed out, culture can be defined as socially shared beliefs, values, norms, expectations, and practices within a group, community, or society at large. Put simply, culture includes the unspoken rules of conduct within a group, such as acceptable social standards. This definition intentionally focuses on psychologically relevant elements of “subjective culture,” such as social norms, roles, beliefs, and values (Triandis et al., 1980). Reading the research of Betancourt and López solidified my interest in conducting cultural research because it provided a method for quantifying the nuances often taken for granted in our everyday interactions. My desire to empirically explore the impact of culture on human behavior brought me in 2011 to Betancourt’s Culture and Behavior Laboratory at Loma Linda University.

How Is Culture Quantified?

When I posed this question to my mentor as a first-year graduate student, he told me that measuring culture is “hard, but doable.” I have heard this phrase many times since then, and it gains more significance the more I participate in cultural research. The Culture and Behavior Laboratory uses a methodological approach called the “bottom-up approach,” in which we use the population of interest itself as the source for building cultural measures. Developing cultural measures directly from the population of interest acknowledges the heterogeneity of culturally diverse groups, which typically include more within-group differences than between-group differences (Betancourt & Flynn, 2009).

The bottom-up approach has been used in research on culture and health behaviors to identify socially shared beliefs, values, norms, and practices. This approach consists of conducting semistructured interviews in focus groups with culturally diverse participants in order to identify specific cultural factors (Betancourt, Flynn, Riggs, & Garberoglio, 2010). By beginning with a qualitative approach, researchers avoid making stereotypical assumptions about the group they are investigating. Once researchers have gleaned salient cultural factors from interviews, this information is used to develop closed-ended items that are then pilot tested with a small sample. Finally, investigators refine and test these items with a larger sample to examine the structure, reliability, predictive validity, and measurement equivalence of the newly developed cultural measure. Through a theoretical model that integrates sociodemographic, cultural, and psychological factors on behavior, we can investigate all of these factors simultaneously. 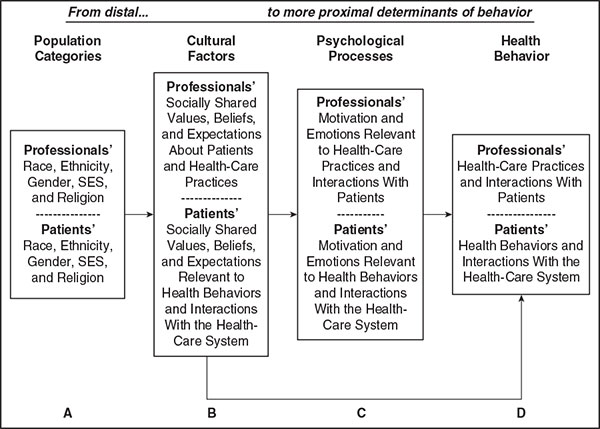 Betancourt’s Integrative Model for the Study of Culture, Psychological Factors, and Behavior, adapted for the study of health behavior (Betancourt & Flynn, 2009), conceptualizes sociodemographic, cultural, and psychological factors as
antecedents to behaviors (see Figure 1). In line with the definition of culture noted above, sociodemographic factors (e.g., ethnicity, religion, sexual orientation, socioeconomic status) are considered as sources of culture rather than a definition of culture (A), and culture (B) is defined as shared beliefs, norms, values, practices, and expectations. This model is unique in that cultural factors are thought to influence health behavior (D) both directly and indirectly through psychological factors (C). To highlight this point, psychological factors (e.g., cognition, emotion, motivation) may mediate the relationship between culture and behavior. The application of this model through advanced multivariate statistics allows researchers to test the structure of relations among multiple variables simultaneously. Notably, this theoretical model has been supported across multiple health behaviors (Betancourt, Flynn, & Ormseth, 2011; Flynn, Betancourt, & Ormseth, 2011).

I have used this model in my own research (Ung, Betancourt, & Flynn, 2014), which I was fortunate enough to present at the 2014 APSSC RISE Student Award symposium. I wanted to investigate both cultural and psychological factors that influenced diet adherence among a culturally diverse group of type 2 diabetic patients. Using Betancourt’s Integrative Model, susceptibility to social influence (e.g., not being able to refuse food offered as a sign of affection) was identified from the bottom-up as a possible barrier to diet adherence for both Native American and mainstream populations (i.e., majority groups) when people were offered unhealthy food. Susceptibility to social influence inhibited self-efficacy, which in turn lowered diet adherence. Integrating culture into this preliminary study allowed multiple points of intervention to be considered that address both the socially shared cultural beliefs about diet and the
psychological factors that can support healthy eating. These findings could inform culturally competent interventions that prevent serious complications related to uncontrolled type 2 diabetes and begin to address underlying mechanisms that may be driving apparent health disparities between mainstream and minority populations.

My hope is that this article has provided resources for conducting theoretically guided cultural research using sound cultural measures and has highlighted the potential to apply research findings to improve physical and mental health among underserved populations. Cultural diversity in contemporary society will only continue to grow, which necessitates research that accounts for the complex relationships among sociodemographic, cultural, and psychological factors in behavior.

Sonika Ung is a graduate student at Loma Linda University in clinical psychology. Her research interests include the role of sociodemographic, cultural, and psychological factors in health behavior and outcomes. She can be reached at skung@llu.edu.