Observer > 2014 > January > How to Make Online Learning Effective
*APS and the Psychonomic Society jointly oversee the William K. & Katherine W. Estes Fund, established in honor of Estes and his wife. The fund supports the development of new programs to support mathematical issues critical to psychological science. 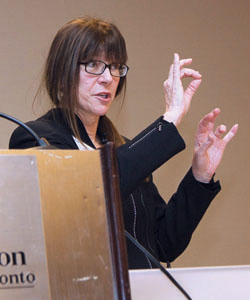 In online courses, calling on students randomly to answer questions, rather than allowing them to sit passively, improves their test performance, says cognitive psychologist Janet Metcalfe.

According to an article published in The New York Times, 2012 was “The Year of the MOOC” — that is, the massive open online course. These giant classes, offered for free by companies such as Coursera, Udacity, and edX, have generated a stir among researchers and educators. While some believe MOOCs have the potential to revolutionize higher education by providing access to a greater number of students, others are skeptical about whether they will produce comparable learning outcomes when stacked up against traditional brick-and-mortar college courses.

At a recent meeting, the Psychonomic Society hosted a panel of researchers on this topic in special honor of the late William K. Estes, a renowned psychological scientist and educator.*

Although we lack a solid foundation of research to determine whether MOOCs actually improve student achievement, several ongoing research projects offer glimpses into what strategies may be most effective.

According to Karl Szpunar, of Harvard University’s Department of Psychology and Center for Brain Science, getting students to stay focused while watching online lectures has been a perennial problem. Aiming to improve focus, Szpunar and APS Fellow Daniel Schacter, also of Harvard, designed an experiment in which students watched an online statistics lecture split into several segments. Some students were given frequent quizzes on the materials, whereas others were given only one quiz at the end. Importantly, all students thought they were going to receive quizzes at random time points throughout the lecture — in this way, it was in their best interest to stay focused and retain as much information as possible.

Overall, the students who received frequent quizzes achieved better focus, took more notes, and recalled about 20% more information from the lecture compared with the group that simply took a test at the end of the lecture. Holding students continuously responsible for information, Szpunar argued, seems to keep students engaged and improves learning outcomes.

Similarly, APS Fellow Janet Metcalfe of Columbia University described how calling on students randomly to answer questions improves their performance in an online learning environment compared to passive listening. This technique — keeping students “on the hook” — improves learning outcomes on an immediate quiz and up to 1 week later. Surprisingly, Metcalfe, who will speak at the 2014 APS Annual Convention in San Francisco, found no evidence that Skyping with other students or with a tutor improves accuracy on tests, although it remains to be seen if Skype would keep students more interested in the class over the long term or promote discussion.

APS Past President Henry L. Roediger, III, also a 2014 convention speaker, discussed new models for integrating online learning into normal university curriculum, as well as some of the logistical barriers that need to be overcome. To Roediger, the most important goal is determining which techniques will keep students enrolled and continue to improve learning outcomes. In line with this, APS William James Fellow Mark McDaniel of Washington University in St. Louis presented data from a meta-analysis conducted by the United States Department of Education. In 27 studies comparing online learning and traditional classes — some of which used random assignment, had the same professors in both settings, or used the same PowerPoint slides — the results seem promising. Overall, it appears that enhanced online learning — lectures with supplementary activities, multiple online videos, and interactive assignments — produced learning outcomes comparable to those of the standard lecture courses.

A critical next step, the panelists agree, is assessing how students respond to online learning: Do they feel as motivated and interested? Do they feel like active participants, rather than just passive listeners? Most importantly, can we distribute online learning to a large and diverse population while still keeping the coursework rigorous and useful?

Janet Metcalfe, Henry L. Roediger, III, and Daniel L. Schacter will be speaking on MOOCs at the 2014 APS Convention.