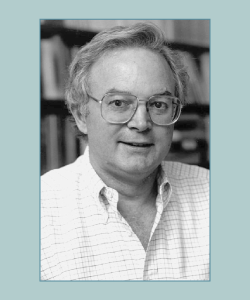 The Princeton University faculty recently adopted a memorial resolution honoring APS Past President and William James Fellow John Darley, who passed away in August 2018. Darley served on the Princeton faculty for 44 years. He is widely known for his research, in collaboration with Bibb Latané, on bystander behavior in emergencies, and for his contributions to science across a vast range of areas, including morality and the law, the function of punishment, and energy conservation. The Princeton faculty resolution, passed by unanimous vote, is below:

This Memorial Resolution prepared by a special committee, was approved by unanimous rising vote at the meeting of the Princeton University Faculty on December 3, 2018 and ordered spread upon the records of the Faculty.

A beloved colleague and mentor, John was one of the foremost scholars of social psychology in his or any generation. He came to Princeton from NYU in 1968 as an untenured associate professor and remained an active faculty member at Princeton for the next 44 years, transferring to emeritus status in 2012.

The theme of Darley’s research was to understand how ordinary people deal with moral issues. He received international attention for his groundbreaking work on the factors that lead ordinary people to help — or not help — others in distress. Inspired by news reports that 38 witnesses had observed the murder of Kitty Genovese in New York City but none intervened to help, Darley set out to understand the social factors that led to such seemingly immoral unresponsiveness. He had an unparalleled knack for understanding the central issues in human decision-making and behavior and bringing those issues into the laboratory for scientific study. In a series of brilliant experiments at NYU and Princeton, Darley’s work demonstrated that ordinary people, including college students, will accept the moral responsibility to intervene to help a person in need if they believe that they are the only witness to the emergency but will look the other way if they are in the presence of others. His decision tree theory of helping remains the seminal view of people’s decisions to help those in need.

As his career progressed, Darley focused his attention on people’s responses to wrongdoing by others. This led him to investigate the causes and consequences of wrongdoing in organizations and industry. It also led him to a multi-decade research program dedicated to understanding lay people’s conception of the law and punishment. He argued that, in order to be effective, the legal system’s use of incarceration for transgressions must be based on society’s underlying moral motivations for punishing transgressors. Darley, along with his students and colleagues, devised innovative methods to increase our understanding of lay people’s underlying motivations for punishment. He wrote persuasively on the need to establish new legal codes for wrongdoing that are consistent with how people view the purpose of legal punishment.

Although Darley was justifiably proud of his research accomplishments, he was especially proud of his role as a mentor and advisor to students and new faculty. He made it a priority to mentor his graduate students about science, about psychology, and about life. He spent countless hours with students, counseling them toward the PhD and beyond. He was a guiding hand nurturing them throughout their careers. As one of his former students phrased it, “He was a giant in the field but never made me feel small and he managed to balance the roles of friend and mentor perfectly.” As a mentor to new faculty, he offered guidance with his characteristic humor and humility. Whether that guidance was about how to get to the heart of a theory, how to help a journal editor see the merits of a manuscript, or even how to help a baby sleep through the night, Darley clearly enjoyed the chance to help young faculty establish their careers — and their lives beyond them.

John Darley was born on April 3, 1938, in Minneapolis, Minnesota. After completing his BA at Swarthmore College, Darley entered the psychology department at Harvard University, receiving his MA in 1962 and his PhD in 1965. His first academic position was as assistant professor at New York University. It was there that he began his classic research studies on bystanders’ responsiveness to others in need.

At Princeton, Darley was the innovator of the modern social psychology program. He oversaw its development as it grew into one of the world’s most prestigious programs. Darley served as Chair of the Psychology Department from 1980 to 1985.

John is survived by his widow, Genevieve Pere, his former spouse, Susan Darley, and two daughters, Leah and Piper, of whom he was immensely proud. He is also survived by his sister, Janet Griffith, and by three wonderful grandchildren.

Mr. President: For the Committee I move that this Resolution be spread on the records of the Faculty; that a copy be sent to his widow, Dr. Genevieve Pere, his former spouse, Dr. Susan Darley, his children, Lea Darley and Piper Darley, his sister, Janet Griffith, and to the Archivist of the University.

* The former name of the Association for Psychological Science

In 2001, John Darley authored an article for Current Directions in Psychological Science, reviewing his own and others’ research on people’s perceptions of justice. Below is an excerpt.

“Fundamental questions often emerge as a research project progresses, and this happened in our work on the citizen’s sense of justice. Why is it, when an actor knowingly commits an offense, that an observer feels the punishment is objectively required? What is the justification for punishment? Psychologists have been quite silent about this, although philosophers have suggested answers … But what does the ordinary citizen take to be the justification for punishment of wrongdoing? This is perhaps the most intriguing remaining question about retributive justice.”

John, with Stanley Milgram, Ned Jones, and Herb Kelman, were the greatest influences in my academic career. We had all of them at Miami for fabulously stimulating talks and visits. I miss John and Ned very much. All of the beautiful tributes in the Memorial Resolution ring absolutely true.