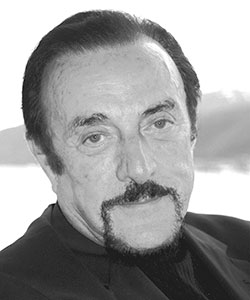 Original uniforms and other artifacts from the historic Stanford Prison Experiment, in which social psychology pioneer and APS Fellow Philip G. Zimbardo examined how college students reacted to being placed in a simulated prison environment as either guards or inmates, will be on display at the 2014 APS Convention in San Francisco, California. The Center for the History of Psychology is sponsoring the exhibit and will display the uniforms from the 1971 study in the Exhibit Hall.

The clothing that prisoners and guards wore served an important purpose in the experiment by playing a role in participants’ perceptions of and reactions to their experimental surroundings.  While the inmates were given identical uniforms and referred to by numbers, the guards wore silver mirroring glasses that shaded their eyes and intentionally resembled the glasses of a sadistic guard in the classic movie Cool Hand Luke.

The lessons learned from the experiment have greatly influenced psychological science over the past several decades. In the Freakonomics Radio podcast “Fear Thy Nature,” originally aired in September 2012, Zimbardo explains that the central goal of his experiment — tweaking the participants’ external environment to see how it would change their internal feelings and behaviors — is still broadly applicable. “I’m a ‘situationist,’ dyed in the wool,” he says. “Individual variations in ‘personality’ predict almost nothing about people in these situations.”

The Stanford Prison Experiment wrought a drastic change in participants, so much so that the study had to be discontinued after only a few days. One third of the “jailers” exploited their authority over the “prisoners,” some of whom became depressed or traumatized. Even Zimbardo, well aware of the experiment’s purpose, began to succumb to a role — that of prison superintendent. He remembers seeing footage of himself patrolling the “prison yard” with his hands behind his back and his chest puffed out. “It’s a position of authority and power which I abhor,” he says. “I always work hard to minimize the power I have as a teacher, and here I was unconsciously assuming it.”

Zimbardo further examined how extreme situations affect the human psyche when he testified as an expert witness in one of the trials that explored whether human rights abuse had taken place at Abu Ghraib prison in Iraq. His 2007 book, The Lucifer Effect: Understanding How Good People Turn Evil, expanded on both the Stanford Prison Experiment and its connections to the alleged Abu Ghraib abuse.