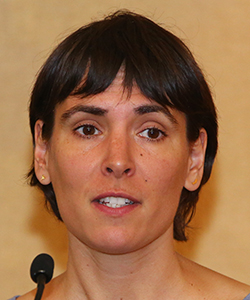 How Neuroscience Can Save the World

Presenters took neuroscience beyond the medical and psychiatric realms to focus on how our understanding of the brain can address problems in society at large at “How Neuroscience Can Contribute to Solving Societal Problems,” a Sunday Symposium. The effects of lower socioeconomic status and chronic stress took center stage as Allyson Mackey, University of Pennsylvania, elaborated on how exposure to discrimination, crime, and toxins such as lead can change the brain. Mirre Stallen (left), Leiden University, the Netherlands, spoke on how incentives can be used to increase people’s intrinsic motivation to cooperate. Much of what psychological scientists already know can be used to inform policy related to the income achievement gap, the speakers said.

Researchers based at the University of California, Merced, spoke on how the adoption of increasingly sophisticated statistical methods is allowing psychological scientists who study human health to better predict risk and health outcomes across massive sets of data. Psychiatric epidemiologist Sidra Goldman-Mellor discussed how she has used unique identifiers in longitudinal data from emergency department patients to identify teen suicide risk factors, such as living in certain neighborhoods or zip codes, which may not otherwise have been obvious. In a similar vein, Geraldy Martin-Gutierrez, a fourth-year PhD student, explained how sociodemographic adjustment techniques can be used to tease out the health disparities between racial and ethnic groups in childhood and adolescence. “Sample proportions that approximate national statistics may not possess statistical power to detect racial and ethnic effects,” Martin-Gutierrez explained. “Therefore, studies may need to oversample minority groups to ensure adequate power to detect racial and ethnic effects.” The Neurological and Academic Impact of Socioeconomic Disadvantage

Growing up in a low-income environment can not only shape your childhood but also your brain, influencing outcomes from academic achievement to mental health and substance abuse. In the case of alcohol consumption, said Johnna Swartz (left), University of California, Davis, exposure to the stressors associated with poverty can alter the way the ventral striatum and medial prefrontal cortex process reward. “The functioning of these same brain regions that seem to be associated with stress also seem to predict risk for different kinds of reward-related pathology,” Swartz said at a Sunday Symposium titled “Socioeconomic Disadvantage and Clinical, Neural, and Academic Outcomes Across Development.” Additional presenters outlined the ways in which these stressors can influence executive functioning and increase children’s risk of developing schizophrenia, bipolar disorder, and other conditions as adults.