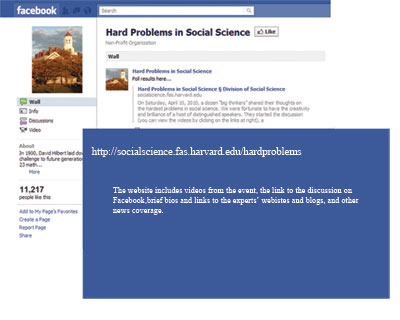 On April 10, 2010, a dozen distinguished scholars convened at Harvard University to discuss what they thought were the “hardest problems in social science.” Over 30 problems were posed, ranging from the methodological to the theoretical to the applied. The symposium was followed by seven weeks of Web-based discussion, during which we encouraged people around the world to debate the expert problems, pose additional problems, and participate in a poll rating the problems for difficulty and importance. The poll questions and tables summarizing the results are posted on the Harvard Faculty of Arts and Sciences Division of Social Science Web site. The following is a brief overview of the project and process to identify “hard problems in social science.”

The idea for this endeavor arose in a conversation between Nicholas A. Nash, a former Harvard undergraduate and member of the Indira Foundation, and Stephen M. Kosslyn, an APS Fellow and then Dean of Social Science in the Faculty of Arts and Sciences at Harvard who is now Director of the Center for Advanced Study in the Behavioral Sciences at Stanford. They were inspired by the German mathematician David Hilbert, who in 1900 laid down a challenge to future generations: He formulated 23 mathematical problems, all fundamentally important and extremely difficult. A century later, 10 of the 23 problems have been fully solved, 11 are partly solved or simply cannot be solved, and two remain at large. Hilbert’s problems had a huge influence on mathematics throughout the 20th century. Nash and Kosslyn envisioned a similarly motivating list to challenge 21st-century social scientists. Unlike Hilbert, they decided to involve both other scholars and the public at large in the development of the list. Recognizing that social science research engages, and has immediate implications for, human society in a way that mathematical research does not (generally speaking), they saw public debate among experts and laypersons alike as critical to the project.

With funding from the Indira Foundation, the Harvard Division of Social Science embarked on a quest to identify and recruit scholars to participate. Members of the university were  asked to nominate “big thinkers” across all fields of social science; citation indices, published lists of influential scholars, and think tank “experts” lists were trolled; and more than 30 invitations were issued. Ultimately, 12 experts in psychology, economics, political science, sociology, and philosophy agreed to present their nominations for “hard problems” at the public symposium. Among these experts were APS Fellow Susan Carey of Harvard University and APS Member Peter S. Bearman of Columbia University. Kosslyn, host and moderator, represented a 13th viewpoint. The resulting 33 “expert” problems formed the basis of the poll. Once the poll was opened and the individual video segments were posted on the website, press releases were sent to media outlets around the world, in English and more than a dozen other languages including Spanish, Portuguese, Urdu, Arabic, Japanese, and Mandarin. During the succeeding weeks, we monitored the public discussion on Facebook, where participants were encouraged to pose their own problems. While it was not intentional to limit the conversation to Facebook, the discussion threads there quickly gained momentum, and Facebook supported this project with free promotion in different markets around the world, helping to obtain input from a broader population than could otherwise be reached.

New problems — ultimately 10 — generating the most debate on the public forum were then added, periodically, to the poll, which remained open until early June 2010. It is evident from the detailed and earnest responses that respondents took the poll seriously.

John Muresianu, a fellow at the Berkman Center at Harvard, analyzed the poll data and ranked the problems according to two “importance” and two “difficulty” metrics, creating four “top 10” lists. Recalling that Richard Zeckhauser suggested in his presentation that the “optimal” problem might be one that is very important but relatively easy to solve, Muresianu included a fifth metric in his analysis, which he dubbed the “Zec” score, calculated by doubling the net importance rating and then subtracting the net difficulty rating.

Is it surprising that the problem with the highest ranking for both importance and difficulty turned out to be a topic not discussed by any of the experts? Perhaps not, given that the topic that garnered by far the most votes for both “extremely important” and “extremely difficult” was “world peace.” In fact, two more of the top five problems, “the relationship between Islam and the West” and “population growth and sustainability,” were posed by discussants on Facebook and did not come up during the symposium. Are these problems simply too hard — too vague, too broad, too complex — for scholars to consider? (Even Hilbert acknowledged that a problem could be too difficult to be fruitfully pursued.)

The Zec score leads to a strikingly different ordering of the problems. Although “world peace” still appears in the top five (due to its overwhelmingly high importance rating), the problem topping the Zec list is expert panelist Roland Fryer’s question, “how do we reduce the skill gap between Blacks and Whites in America?” In fact, three of the top five problems on the Zec list, including Claudia Goldin’s “understanding the male/female wage gap,” and Nick Bostrom’s “understanding the effect of pervasive surveillance on culture,” do not appear in the top five on any of the other lists, and Goldin’s and Fryer’s problems don’t even appear in the top 10.

There were, of course, limitations to the exercise. The list of problems was constrained by the interests of both the specific experts we consulted and of the particular populations participating in the discussion on Facebook. Scholars tend to gain distinction by researching big problems, so if you ask such experts “what is a hard problem in your field?”, it is hardly surprising that they would come back with, “well, here’s the issue I’m currently working on!” The scholars themselves acknowledged this bias during the symposium. Because the initial event took place at Harvard, in the United States, it was conducted in English, and due to the location and the fact of limited funding, American (and indeed, Harvard) scholars were over-represented. And despite a fascinating distribution of “fans” on Facebook, there were also disappointing gaps. While India and Pakistan combined (1,114 and 1,292) produced about as many fans as the United States (2,436), and while there were fans from countries as diverse as the Philippines (705), the United Kingdom (461), Indonesia (445), Turkey (289), Brazil (253), Georgia (170), Vietnam (102), and Nigeria (101), to name a few, other regions, most notably China, Russia, and Japan, were conspicuously absent. Although we had over 10,000 fans on Facebook, on average we received only about 300 responses per poll item, and the poll sample was even more skewed (more North Americans, and fewer Asians).

This was not itself a scientific effort to objectively quantify the hardest or most important problems (that would be impossible in any case), and we can make only modest conclusions about public opinion, as too many stakeholders did not participate.

However, judging by the impassioned debates among those who did participate it seems that we have succeeded in providing a challenge for the next generation of social scientists. We have stimulated a conversation among an international community about the future of social science research, about the role of science in solving the world’s problems, and about the importance of multidisciplinary and collaborative efforts to reach solutions.

Academics are sometimes perceived as existing in an ivory tower, oblivious of the troubles of the real world; this exercise serves to remind scholars — whose research is usually publicly funded — of the concerns of the global citizen at the start of the 21st century. If it seems far-fetched to imagine that social science can help bring about world peace, is it any more far-fetched than hoping that medical science can eradicate cancer or reverse aging? Or that research in physics will lead to a “theory of everything?” The point of this and other similar endeavors, such as APS’s own “Human Capital Initiative,” the National Science Foundation’s “SBE 2020: Future Research in the Social, Behavioral & Economic Sciences” effort, the Templeton Foundation’s “Big Questions” series, and the Canadian Institute for Advanced Research’s “Next Big Question” project, is not to limit research to particular topics. Quite the opposite — bringing attention to big problems broadens our viewpoint, makes us reconsider what might be possible. 

Written by Jennifer M. Shephard who takes no credit for the idea behind this venture, but was intimately involved in managing the project at every stage. She worked for Stephen Kosslyn for over a decade in a number of capacities from research assistant to event planner, and she continues to work as Special Initiatives Program Manager for the current Dean of Social Science at Harvard.