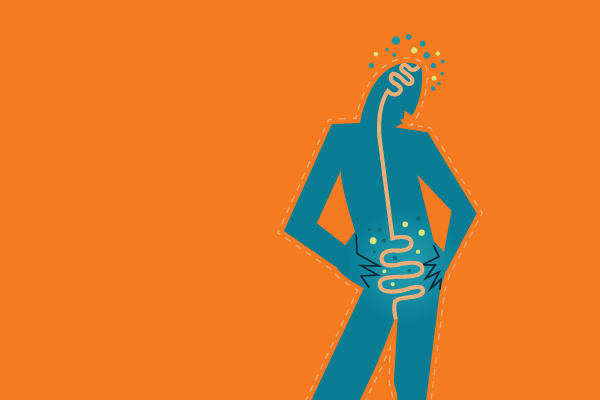 The plausibility of “gut feelings” may seem inherently incompatible with the data-driven enterprise of psychological science. But a growing body of research on the brain-gut axis suggests that the microbes in our digestive system indeed have a measurable role in our brain function and structure, influencing mood, emotion, and behavior along with other important aspects of our personalities and our mental and physical health.

The gut microbiome is home to the largest collection of microorganisms in the human body. It encompasses the trillions of bacteria, viruses, fungi, and other microorganisms that live inside the gastrointestinal tract, which includes not only the stomach but also the mouth, esophagus, pancreas, liver, gallbladder, small intestine, and colon. After the brain, the gut contains the body’s largest number of neurons (Bastiaanssen et al., 2020).

In recent years, studies on humans and animals, some using neuroimaging, have added to the evidence for links between the composition of gut microbiomes and brain processes. For example, a lack of certain gut bacteria has been associated with psychiatric disorders ranging from anxiety and depression to attention-deficit/hyperactivity disorder (ADHD) and autism spectrum disorders (ASD). Research has also revealed connections between bacteria in the microbiome and personality traits. And introducing certain kinds of bacteria into the body has been shown to alleviate adverse effects of stress and even disease symptoms. A 2018 study, for instance, suggested that a ketogenic diet may prevent seizures associated with epilepsy by increasing the population of certain bacteria (Akkermansia muciniphila and Parabacteroides merdae) that reduce the amount or the metabolism of amino acids associated with seizure-related activity in the hippocampus (Olson et al., 2018).

The links between gut bacteria and behavior or individual characteristics cannot be fully understood without understanding how the gut microbiome and the brain communicate. Research has suggested that this communication is bidirectional, with the microbiome influencing the brain as much as the brain influences the microbiome (Smith & Wissel, 2019). The brain-gut axis is a network that appears to facilitate communication among gut microbes, the central nervous system, the peripheral nervous system, and the enteric nervous system (embedded in the gastrointestinal tract). It appears that bacteria are able to produce and respond to different neurochemical signals, which travel to and from the brain.

Mauro Costa-Mattioli, a professor of neuroscience at Baylor College of Medicine, studies how gut microbes influence the central nervous system and brain functions. In a talk in January 2021, he proposed that environment and genetics can influence gut microbiota, which communicate with the brain, influencing complex behavior. One communication channel between the gut microbes and the brain appears to be the vagus nerve, which extends from the brain stem through the neck and the thorax down to the abdomen.

In research on ASD in animal models, Costa-Mattioli and colleagues found that treatment with the bacteria Lactobacillus reuteri—which reduces social deficits in mice that lacked those bacteria—appeared to work not by replenishing the mice’s gut microbiome but by promoting social-interaction-induced synaptic plasticity, which is impaired in ASD, through interactions with the vagus nerve (Sgritta et al., 2019). These findings support the groundbreaking idea that the gut microbiome can influence brain plasticity—and suggest that this type of research could point to novel therapies in human patients. However, the researchers cautioned that “the gut-microbiota-brain axis is an emerging field, and to ensure the success of microbial-based therapies for neurological disorders, we believe that first it would be important to establish a set of defined and objective criteria for transitioning into human clinical trials.”

“Neuroimaging is at its most powerful when it can reveal an insight and understanding to a phenomenon that has been either a mystery or not believed due to the subjectivity of response measures,” wrote Emeran A. Mayer and colleagues in 2019. One such phenomenon that the researchers examined is irritable bowel syndrome (IBS), a common condition characterized by chronically recurring abdominal pain and altered bowel habits. Patients diagnosed with IBS and other gastrointestinal disorders also experience high rates of anxiety and other psychiatric comorbidities. IBS-related alterations in functional, structural, and anatomical brain networks, Mayer and colleagues wrote, “have provided plausible neurobiological substrates for several information-processing abnormalities reported in patients with IBS.” These include biased threat appraisals, or “catastrophizing,” and outcome expectancies (related to the salience network); autonomic hyperarousal (related to the emotional arousal and central autonomic networks); and symptom-focused attention (related to the central executive network).

For more on the gut-brain axis, read:

In another 2019 study of patients with IBS, Jennifer S. Labus and colleagues explored whether an abundance of serotonin-modulating bacteria that commonly reside in the intestines of healthy adults is associated with functional connectivity of somatosensory brain regions and GI sensorimotor function. Using several methods, including functional brain imaging (fMRI), they observed disruptions in the interactions among the patients’ brain, gut, and gut microbial metabolites. These disruptions, which involve both the cortical and subcortical regions of the brain, “may contribute to visceral hypersensitivity and altered perception of pain” in these patients, the researchers wrote.

Can bacteria sometimes have a beneficial impact on people with IBS? While probiotics—live microorganisms found in yogurt and other fermented foods—had already been shown to reduce the physical symptoms of IBS, research published in 2017 by Maria Ines Pinto-Sanchez and colleagues suggested that they could also reduce depression and improve quality of life for these individuals. In a randomized, double-blind, placebo-controlled study of 44 adults with IBS and mild to moderate anxiety and/or depression, patients who received the probiotic strain Bifidobacterium longum NCC3001 were more likely than the placebo group to show a mean increase in quality of life and scored lower on a measure of depression 6 weeks later.

Looking further at the role of the microbiome in depression, a review by Thomaz Bastiaanssen and colleagues in 2020 explored the interplay between the gut microbiome and major depressive disorder. “The gut microbiome is a highly dynamic system, undergoing constant change over time,” they wrote. “The degree and manner of change is thought to be determined by a vast combination of factors, ranging from stage of life to exercise.”  They cited research involving the Mediterranean diet, which affects the gut microbiome by increasing the abundance of bacteria with anti-inflammatory properties and has also been found to shorten episodes of depression.

“The gut microbiome is a highly dynamic system, undergoing constant change over time.”

Turning to the influence of the microbiome on stress, Bastiaanssen and colleagues noted animal research pointing to the microbiome’s important role during early development. For example, germ-free mice showed an exaggerated stress response that was normalized after their guts were colonized with a probiotic. A 2019 study by Huiying Wang and colleagues applied this concept to humans, showing that probiotic strain Bifodobacterium longum 1714 (Zenflore) may play a role in managing stress responses in healthy volunteers by modulating their neural processes.

“People with larger social networks tend to have a more diverse microbiome, suggesting that social interactions may shape the microbial community of the human gut,” wrote Oxford University researcher Katerina Johnson in 2020. “In contrast, anxiety and stress are linked to reduced diversity and an altered microbiome composition.” She also found that some types of bacteria are differentially abundant in relation to personality traits. “Together, these results add a new dimension to our understanding of personality and reveal that the microbiome–gut–brain axis may also be relevant to behavioral variation in the general population as well as to cases of psychiatric disorders.”

Johnson elaborated on her findings in an interview with the Observer. Traditionally, most research on the brain-gut axis has been conducted on animals, she noted; in fact, some of her previous research looked at the personalities of birds. But among the human research that had been carried out, “a lot of it was based on autistic patients or people with psychiatric conditions.  In contrast, my key interest was to look in the general population to see how variation in the types of bacteria living in the gut may be related to personality.”

To explore these questions, Johnson recruited 655 adult participants in 20 countries. Participants provided fecal samples, which were analyzed by microbiome-sequencing company uBiome, and completed an online questionnaire that Johnson used to measure 44 variables related to behavioral traits, diet, health, lifestyle, and sociodemographic characteristics. Sociability (a combined measure of extraversion, social skill, and communication) proved a positive predictor for an abundance of beneficial gut bacteria such as Lactococcus and a negative predictor for an abundance of Desulfovibrio and Sutterella.

“So many factors can influence something as complex as a personality. The gut microbiome is just another factor.”

Johnson’s research controlled for a number of other variables that can also affect gut bacteria—and, in turn, its relationship with personality traits. For instance, age and body mass index were common predictors of bacterial abundance. In terms of microbiome diversity, adults who traveled frequently, ate more diverse foods or more foods with naturally occurring probiotics or prebiotics, or were breast-fed as infants tended to have more diverse microbiomes. Women’s microbiomes were shown to be less diverse than those of men. Microbiome diversity was also negatively related to unemployment and, perhaps strangely, dog ownership.

“So many factors can influence something as complex as a personality,” said Johnson. “The gut microbiome is just another factor.”

Freelance writer Alex Michel contributed to the research for this article.

Published in the print edition of the March/April issue with the headline “The Second Brain.”

Leah Thayer is the editor of the Observer and the senior director of communications at APS.